BODYSNATCHING BOYO JAY HARRIS: “THERE’S NOT MUCH MEAT FOR PROTECTION ON THE FLYWEIGHTS!” 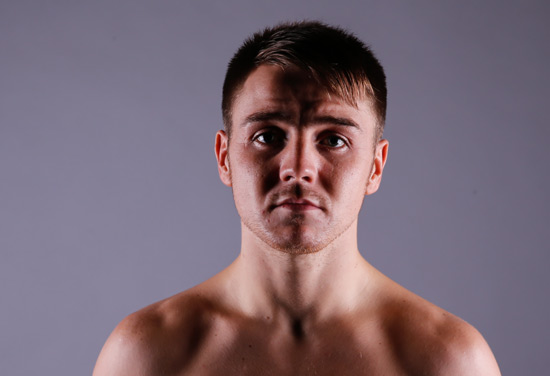 After kick starting his pro career with three four round points wins in 2013-14, the 26 year old Swansea slayer has rubbed out his last six rivals in 18 rounds combined, with lung popping left hooks to the liver the key cause behind the carnage.

The former British amateur champion shall be required to boil beneath 112lbs for the first time in his nine fight, three and a half year pro career when he confronts Cameroon hard case Thomas Essomba live on BoxNation. Nevertheless, the 5ft 5in Gary Lockett-managed West Walian is adamant that this shall not diminish his fabled firepower.

‘My shots seem to carry the same weight in sparring but, with me, it’s always been more about picking the right shots and the placement; those hooks just behind the elbow,’  says Harris who is coached by his father Peter, a former British featherweight champion who fought five world champions in the 1980s.

‘Not many Europeans throw the body shots at the lighter weights which is strange given there’s not much meat there for protection on us flyweights!’

Hooker Harris’s advance to championship contention is all the more meritworthy given his isolation in west Wales plus preparation that is routinely compromised from working full-time night shifts as a forklift truck driver.

‘I can’t risk giving up my job yet so I worked nights on Thursday and Friday of last week but had this week off. Most of my prep has taken place with my Dad in Swansea but twice a week I come up to Gary (Lockett)’s gym in Cardiff,’ says the Swansea City fan who has fought as high as super-bantam, four divisions north of tonight’s cut-off.

‘I’ve had six weeks’ notice and only weighed a pound over for each of my last two fights so making eight stone really won’t be a problem.

‘When I turned pro my diet was wrong but I’ve since sorted it and the weight just dropped off, nice and gradual, without starving myself. I still eat three good meals a day but the right foods at the right times; chicken breasts, potatoes and salads, all of which I enjoy.’

Remarkably, Harris enters the 12 round championship arena for the first time with just 30 rounds on his pro CV and without having ventured beyond round four.

‘I have prepared for longer fights,’ assures Jay.

‘Five of my last six where scheduled for six rounds and my fight with Ramesh Ahmadi was billed for eight but I won them all by stoppage inside four rounds. Still, I’ve been getting the rounds in, in the gym, against good boys.

‘I’ve had some decent sparring at the Everton Red Triangle gym in Liverpool, with (Midland Area flyweight king) Jamie Williams in Birmingham and with a local lad called Josh John, who’s the current British amateur champion at 56 kilos. I’ve sparred 10 rounds no problem. It’s about mindset as much as physical.’

Conversely, the African champion, three years his senior, passed through round ten for both his title win over Sheffield’s Waleed Din (rsc11) and his most recent gig against Scotland’s ex British and Commonwealth challenger Iain Butcher (lpts10). In nine starts (seven wins), Essomba is yet to be stopped. For once, it could be a long shift for Harris. No problem, he says.

‘We’ve only been able to locate one video of Essomba, his last fight against Butcher in Edinburgh. He looked decent; a strong, come forward fighter who likes to fight on the inside.

‘But we know his background. Apparently he went to two Olympic Games for Cameroon. We expect he’ll be very fit and looking to put the pressure on. He can be a bit wild and dangerous with the right hand so we’ll definitely need to be mindful of that. We expect that he’ll be there for the full 12 rounds so we’ll be looking to be sharp and (out) box him from range, just like Butcher did.’

And this quiet, gentle, unimposing soul – who morphs into a feared assassin once the gloves are laced – is confident that he shall be coronated provided he executes the strategy devised by his experienced back-up staff.

‘I expect a good tough fight for the fans,’ he concludes.

‘Essomba will probably come out firing but that should suit me. I’ll feel him out early rounds and take it from there. I certainly won’t be disappointed if I don’t stop him. I’ll just do my best and hopefully win the title in impressive style.’