Amid all the hullaballoo of the weekend’s boxing one result for me was outstanding – the emphatic victory in Moscow by Enzo Maccarinelli who almost certainly has brought the illustrious career of the legendary Roy Jones jnr to a painful conclusion. 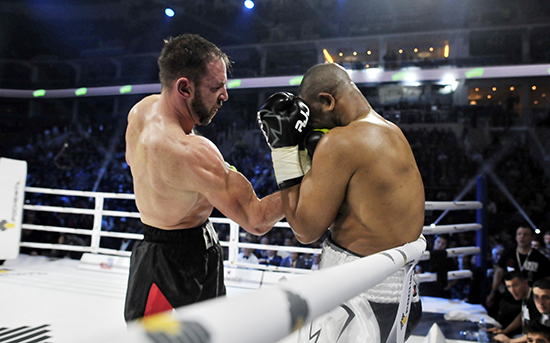 Enzo was terrific in knocking out the former four-weight world champion in four rounds before a huge sell-out crowd at the VTB Ice Palace.

Ok, so Jones is 46, but Enzo is no spring chicken either at 35 and the Florida-born American who is now an adopted Russian had won his last eight fights on the trot.

Big Mac served up a real whopper, a crisply-delivered uppercut for the initial knock-down that was equally spectacular to that thrown by Anthony Joshua to finish off Dillian Whyte at the O2 (I’ll give my assessment on Joshua tomorrow).

The uppercut is one of the most effective punches in the boxing text book but is not used as frequently these days as it used to be by the warriors of old.

Yet when aimed with force and precision it is can be devastating. So can a hook to the temple, with which Enzo poleaxed Jones.

The big Welshman had boxed really well, with sensible control throughout a bout which lasted only marginally longer than the Russian national anthem lustily belted out by an impressive military ensemble in full regalia in honour of Jones’ newly-acquired citizenship.

In fact BoxNation viewers would have enjoyed quite a show staged there. It was like a big fight night being staged at as part of the Royal Variety Show with all the singing and dancing extravaganzas that accompanied the fight card.

I am delighted for Enzo because he is one of the most decent and honest pros in the business, one who lives for boxing. Now he’s born-again under the tutelage of Gary Lockett, who has done a fine job with him.

He was in tremendous shape and after those worrying setbacks a few years ago – when I seriously wondered whether it would be wise for him to continue – he has sensibly moved back up again to cruiserweight and now won his last three bouts, looking more like the fighter who first won the WBO belt in 2006.

He has a new a spring in his step and fresh venom in in his gloves.

The bout was originally billed as a WBA cruiserweight title fight until the ruling body changed their minds. Now I will happily put forward Enzo as a contender for any of the current world titles.

I will certainly be pitching for him to get a crack in 2016 in what may well be his last year in boxing.

Meantime if the ever-mouthy Tony Bellew is looking for decent pay day to defend his newly-acquired European title I am sure Enzo would be up for it in the New Year.

As for Jones, he has been a stand-out champion but he is looking as jaded and fight-weary as another ring legend, the great Sugar Ray Robinson was when he boxed on into his mid-forties.

He has been one of the finest boxers in history but the time has come to quit and bite the bullet which Enzo fired so devastatingly in a ring game of Russian roulette.