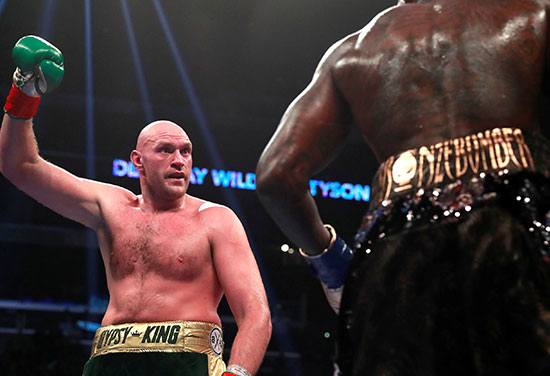 As I was saying here last week about Tyson Fury’s world title fight with Deontay Wilder in Los Angeles: “There may well be a hugely controversial ending.”

Indeed there was. And the controversy lingers on, and rightly so. No doubt in my mind –and those of most others – that Fury was the victim of a heavyweight heist.

Robbed of a deserved victory by a ringside judge masquerading as a Mexican Dick Turpin.

I agree with Frank Warren that his scoring (making Wilder the winner by four rounds) was scandalous. But to add to the controversy some questioned whether Fury was given a long count by the excellent American referee Jack Reiss in the final round of a fantastic contest which restored real quality to the heavyweight division.

That said, a draw was a phenomenal result for the born-again Gypsy King who twice climbed off the canvas to outbox and outfox Wilder as he did Wladimir Klitschko three years ago.

Yet despite the contentious outcome Fury’s post-fight behaviour was impeccable. His love-in with Wilder, exchanging kisses, prolonged hugs and reciprocal compliments while declining to rant and rave over such rough justice probably prevented a ringside riot by his army of rowdy supporters.

Instead he was astonishingly philosophical with no hint if nastiness. Had he thrown a wobbly it could have been off at all meetings, as they say.

In doing so he gained the respect he had craved for years in America and at home.

Larceny and a long count? The debate continues.

What matters is that the giant Gypsy King and the power-punching Bronze Bomber gave us a titanic battle to savour.

Fury’s comeback is surely one of the greatest in boxing history, shedding some ten stones in order to perform what is tantamount to a near miracle.

In just his third fight following 30 months away from the sport, citing drugs and depression, he said his display showed vulnerable people that “anything is possible”.

I had my differences with Fury in his earlier days, when he lost control of his mouth and his mind. But now I salute him. He seems to have made a bonfire of his profanities and emerged after his enforced hibernation as someone the public can embrace and applaud. From zero to hero indeed.

His remarkable ring renaissance is coupled with a dramatic shift in his persona. The new Fury speaks cogently and acts rationally. The demons seem to have been well and truly ko’d.

The thought occurs that Fury continues in this almost loveable vein, who knows, the public surely will bestow on him similar affection.

Despite his many earlier aberrations he has always been fan-friendly with a large and loyal following. He has become a pugilistic Pied Piper.

The response to his valiant and convincing effort to dethrone WBC champion Wilder suggests that his resurrection and redemption is now complete, so much so that he is well in the running for this year’s BBC Sports Personality of the Year award.

Yet three years ago there was a petition to remove him from the ballot following his stunning acquisition of Klitschko’s world titles because of some of his more distasteful diatribes.

It seems the public now have sympathy for Fury rather that antipathy and the on-the-night SPOTY votes could be more favourable to him than those of that myopic Mexican judge.

There is certainly no bigger sports personality out there than the 6fy 9in Mancunian.

Whatever happens we know the new Fury will accept that verdict with the graciousness he showed on Saturday night.

He says: “All that happened back then is what it was. This is a new game, new era, a new everything. If I get it, I get it. If I don’t, God bless the person who does.

“The real me has been here since I came back to the ring. It was about time that everyone saw the real Tyson Fury.

“I’ve definitely got the recognition from the boxing fans and now I feel I’ve more support than ever before.”

The way he somehow prised himself off the floor in that dramatic finale seemed a metaphor for what has happened o him in life. He was knocked down, but he’s back up again.

Whether he and Wilder will dance together in a reprise, or whether either will instead face Olympic and multi-belted world champion Joshua at Wembley Stadium in an April blockbuster, is open to conjecture and fierce negotiation.

But what cannot be disputed is that Fury is the top draw in every sense.