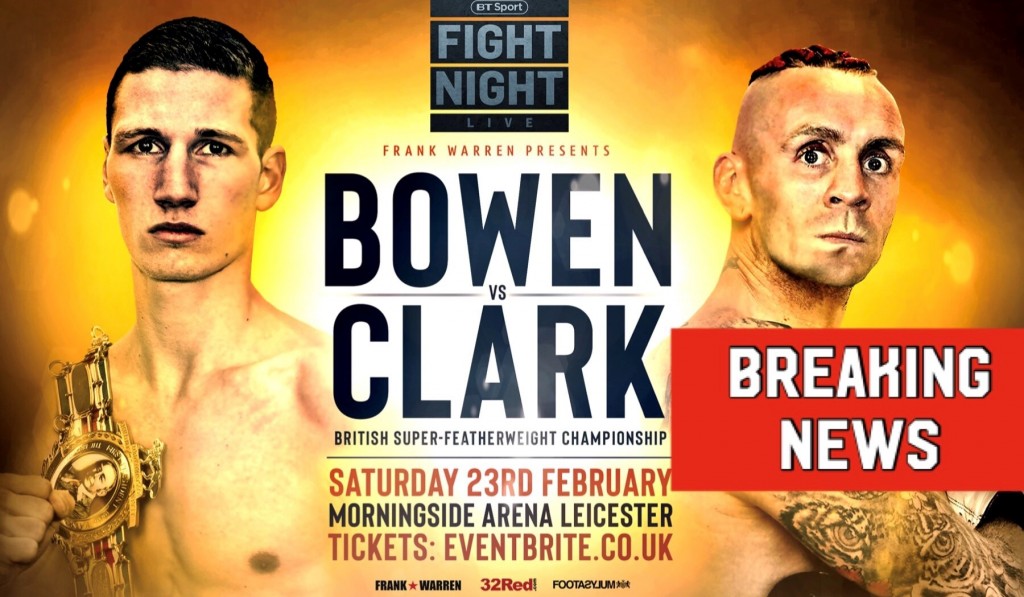 Light Heavyweight sensation Anthony Yarde (17-0) will also return to action in a defence of his WBO Intercontinental light heavyweight title. The show will feature a number of the city’s finest young prospects, including a Midlands Area title challenge for 9-0 super welterweight CJ Challenger and the return of 11-1 super featherweight Lyon Woodstock.

Elsewhere on the bill, 14-0 Cruiserweight Jack ‘One Smack’ Massey will look to climb the world rankings as he challenges for the WBO European cruiserweight title.

Bowen, 26, was originally scheduled to defend his title against Clark, 33, this weekend before the 14-0 man from Ibstock in Leicestershire was forced to withdraw after suffering a rib injury in sparring against his gym-mate David Avanesyan.

It was a setback which disrupted some strong momentum built-up by Bowen, who won the Lonsdale belt against Maxi Hughes in April before – after signing a promotional agreement with Frank Warren – adding a second belt to his collection with a hugely impressive fourth round stoppage of Horacio Alfredo Cabral for the vacant WBO Intercontinental title at the same Leicester venue in October.

Bowen will be bidding to vindicate his firm belief that he is the top man in the domestic division against the wily Scot from Dundee, who recorded a significant upsetting of the odds in his last fight in February.
In front of a packed house at York Hall, Clark lived up to his pre-fight promise and de-railed the unbeaten quest of formidable prospect Zelfa Barrett to win the vacant IBF European title.

Clark spectacularly sent Barrett to the canvas in the sixth round before proceeding to win via a majority decision at the end of 12 rounds.

Tickets priced between £40 and £150 are on sale NOW via Eventbrite.