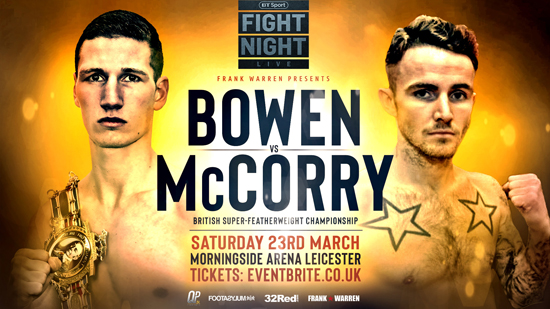 SAM BOWEN WOULD have been set to clock up a second defence of his British title on March 23 in Leicester were it not for a sparring mishap that left him feeling like he’d  been stabbed.

The super featherweight was preparing for a December defence when a routine spar against his gym mate, former world champion David Avanesyan, took a cruel twist and left him in agony for over six weeks.

Avanesyan unleashed a rib-tickler from an awkward angle that left Bullet Bowen firing blanks and his pre-Christmas date in Brentwood abandoned. The Ibstock man will now get to perform in front of a home audience at the Morningside Arena in a first fight of what he hopes will be a productive year with a first defence of his title against the Scottish champion Jordan McCorry, live on BT Sport.

“I said to Carl (trainer, Greaves) at the end of the round that it felt like I’d got internal bleeding. We carried on because he didn’t understand how bad it was and it was round four of eight that I did with him.

“Don’t get me wrong, it was a good spar and he is extremely strong, but I ended up struggling to drive home because I was in absolute agony.

“I didn’t do anything for two days before going swimming, thinking that it might loosen me up a little bit, but I couldn’t even manage that.

“So I ended up going to the doctors and he said if I had not cracked my rib, it would be muscle damage. The muscle makes more sense because I wasn’t winded and it wasn’t like I took good body shot, it was how he hit me and the angle.

“I was referred to the hospital but they refused me as they don’t do anything for a suspected broken rib, then I booked in private and just before they rang me and said it was the same rules as the NHS.

“I was at a loss and needed to find a good vet who would x-ray me!

“It’s healed up now, but it took six or seven weeks before the pain went away. I fine sparring now and I haven’t felt it once.”

Bowen, who turns 27 in April, will consider his British title options before determining which route he chooses to further his career. He doesn’t want to reach the veteran stage and still be negotiating domestic defences, although he received confirmation of his youthful looks from an unexpected direction recently.

“I don’t want to reach 34 and still be fighting at British level. My aim is to get to 30 and be where I want to be.

“I know I look younger than I am, but I had Virgin come to the door the other and ask if my parents were in! I thought you cheeky ba***rds, I live here mate! I should have played along and said they were at work…”