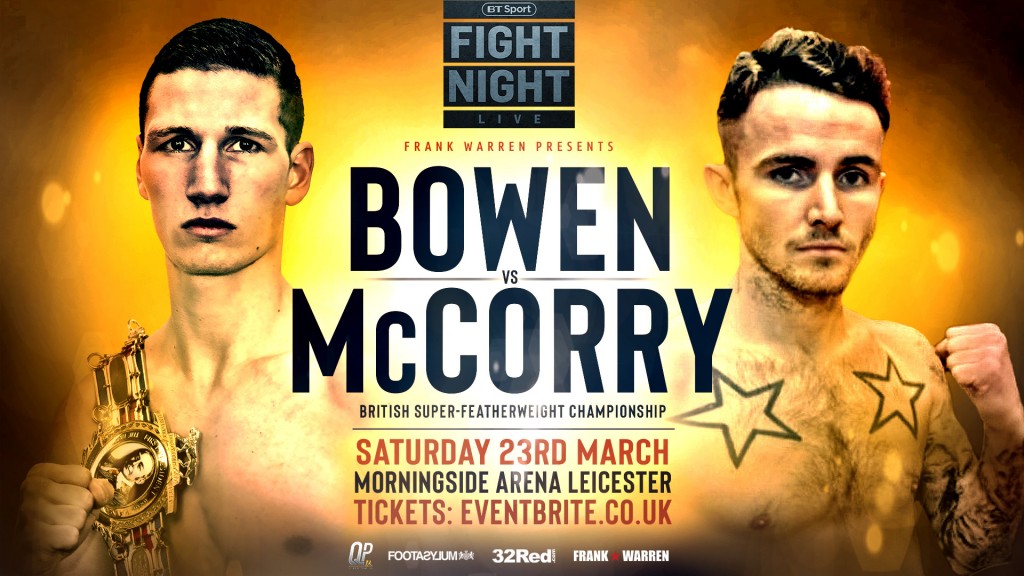 SAM BOWEN WILL make a first defence of his British super featherweight title against Jordan McCorry at the Morningside Arena in Leicester on March 23, live on BT Sport.

The unbeaten Bowen, 14-0, from Ibstock in Leicestershire, was originally scheduled to defend against Ronnie Clark on a bill that also features a battle for the vacant Midlands Area super welterweight title between local lads CJ Challenger and Kyle Haywood and Sam Maxwell bidding to win the WBO European super lightweight title against the Spaniard Kelvin Dotel.

Clark withdrew from his challenge due to injury and the 26-year-old Bowen faces a new foe in the 17-4-1 Scot McCorry, who last time out made an unsuccessful bid to win the WBF world super featherweight title against Patrick Kinigamazi, losing on points in Geneva.

A former Scottish champion at lightweight, McCorry won the super featherweight belt at the second attempt against Jamie McGuire in July 2017 and recorded six straight wins prior to his WBF title challenge.

Bowen won his British title with victory over Maxi Hughes in April of last year and subsequently claimed the WBO Intercontinental belt with a fourth round stoppage of the rugged Argentinean Horacio Alfredo Cabral in October.

The 26-year-old has now compiled a record of 14-0 with ten victories coming via KO.

“I’ve only seen footage of one fight that Carl (trainer, Greaves) sent me and he looks like a good mover,” commented Bowen on his challenger. “You can’t really tell too much, but I don’t think he looked too big compared to me.

“He boxed an African (Abraham Ndauendapo) in the fight I got sent and he looked alright in it. His style is on the back foot a little bit, but I am thinking I will just be too strong from what I have seen of him.

“I am pleased to have a challenger booked in and hopefully the habit people have of pulling out stops now and the fights happen for me. It will be good to get a defence of the British title under my belt in front of the home fans in Leicester.”

McCorry, for his part, is naturally thrilled to be handed a shot at the British title and believes the opportunity represents a breakthrough for his career prospects.

“I’m buzzing, obviously I was meant to fight twice in an eliminator but they never happened, so when I was offered this fight I jumped at the chance. Everybody wants to fight for the British title and it is a great belt.

“This is my breakout fight, for sure, and if you are ever going to make a name for yourself it would be on BT Sport in the public eye in a big fight for the British title. It is a big event to be on.

“Obviously Sam is a big puncher and a good boy but, at the end of the day, you are not going to win a British title if you are rubbish. When you get into the top ten at this level everybody is going to be good.

“We know he is big for the weight and strong, so it will definitely be a good fight. We know he has got a lot of power, likes to come forward and stuff like that, so I know that at one point in the fight I will just have to bite down on the gum shield and go toe-to-toe.”