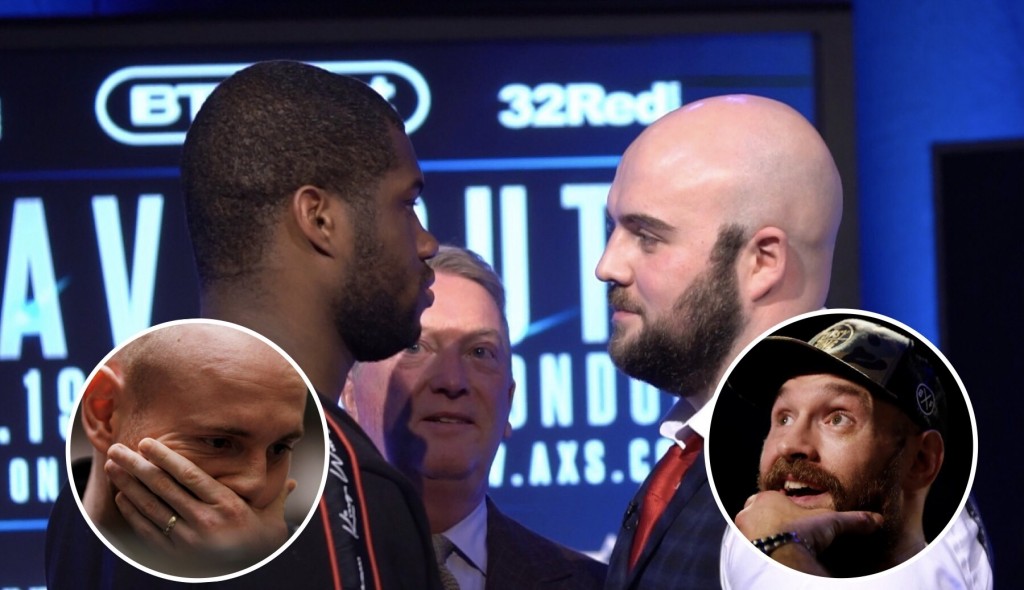 BRITISH boxing idols Tyson Fury and George Groves are in disagreement over the sensational heavyweight showdown between the division’s leading prospects Daniel Dubois and Nathan Gorman.

Lineal world heavyweight champion Fury is firmly in the camp of his cousin Gorman and has been helping him in early stages of training.

The pair have been sparring at the gym of Ricky Hatton who trains the hopeful and Fury has been on hand to give advice.

Former WBA super-middleweight champion Groves is sold on Dubois and believes he has the potential to become a boxing great.

Fury who is preparing to fight Tom Schwarz in Las Vegas on June 15 dismissed the claims of Groves.

He is confident Gorman will triumph and roared in a recent training session: “Daniel Dubois, he’s coming!”

Gorman confirmed “Tyson is backing me one hundred per cent. He fully believes I have the ingredients to beat Daniel. It’s good to be around him, it’s fantastic to have him in the gym.”

He said: “I remember seeing Daniel Dubois in Dale Youth amateur gym. I look back and think; ’Why didn’t I go back in time and sign him’?

“He has so much more to develop and learn. He can become the best if not the best in the heavyweight division.

“He hasn’t put a foot wrong, but there is something about him and it’s a good thing –

It is like having a young junior who still looks boyish and you know what a handful he’ll be when he gets his man strength. It’s the case with Daniel.

“Dubois has phenomenal punch power, but I feel like the nitty gritty boxing skills and know-how will come with experience.

Recently retired Groves told the 5 Live Boxing Podcast with Costello & Bunce that the battle has Fight of the Year potential, adding: “I am happy for this fight because they are young enough for the loser to rebuild.

“It’s a good fight for both of them and the winner will go onto something else. They are both willing to put it on the line and it’s a real fight.

“It is fascinating that they know each other so well and it’s good for them to be in a real fight.”
Tickets for ‘Heavy Duty’ featuring Daniel Dubois v Nathan Gorman for the vacant British Heavyweight Title, plus Olympic silver medalist Joe Joyce are on sale now via AXS.com, Eventim and Ticketmaster and are priced as below: