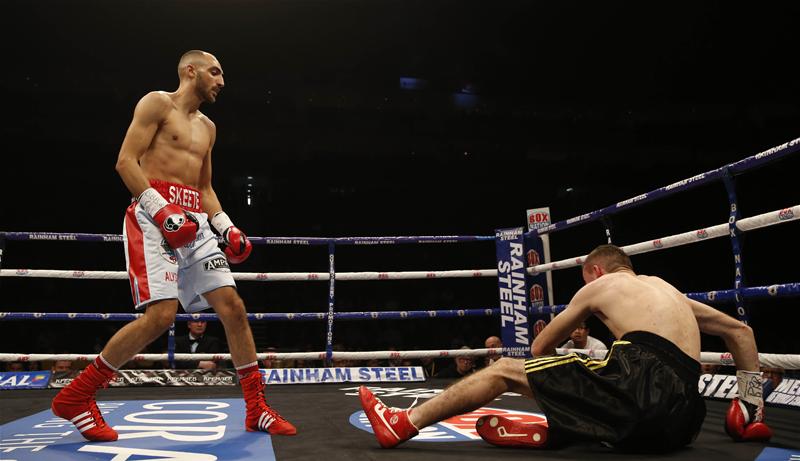 Currently custodian of the WBO European title, the 27 year old south Londoner has bountiful options at both domestic and international title level.

Ahead of his title defence against Italy’s one-time WBA ‘interim’ title challenger Brunet Zamora at Wembley on Saturday, the 6ft 1in Al Smith coached Skeete cast a critical eye over the leading domestic adversaries who could shape his future.

1. Amir Khan (ex IBF/WBA light-welter champion):  “For me, Amir is still Britain’s best welterweight, above Kell Brook. Khan’s produced more on the world scene. He’s always in exciting fights and he’s got wicked hand speed, footwork and reactions.
“Linking up with Virgil Hunter has done Amir the world of good. He really impressed me in his most recent fights against Luis Collazo and Devon Alexander. That’s the best we’ve ever seen him. I think he beats Kell with his speed and movement.”
2. Kell Brook (IBF champion): “I was a huge fan of Kell as he came through the ranks and always expected he’d get to the very top. But after his struggle with Carson Jones in their first fight, I started to question: ‘Is he that good?’

“So to go to the US and win a world title from a real top class operator like Shawn Porter proved he’s quality. Kell’s very powerful and very spiteful; a real executioner. He always gets the job done. Like Khan, he’s a little above my level at the moment.”

3. Frankie Gavin (ex British and Commonwealth champion): “A man I know very well after sharing 12 rounds with him last November. Beforehand, everyone said I wasn’t in his league but I took him to the wire and landed the cleaner shots.

I’m not bitter that I didn’t get the decision and I wish Frankie all the best in his world title fight with Kell but I can’t see him winning. He’s tricky and awkward but Kell’s from a gym full of that style of fighter and it wasn’t hard for me to catch Frankie clean.

“Kell’s a big welter, Frankie ain’t. His great amateur achievements came down at lightweight and he’s just not strong enough at European or world level over 12 rounds. Kell will be too strong and I’d be pretty confident against Gavin in a rematch.”

4. Bradley Skeete (WBO European champion): “If and when Frankie vacates his British belt, I should be in one corner for the vacant title. I showed my level by running him so close and now he’s fighting at world level.

“I’m huge for the weight, an awkward counter puncher and my jab will give anyone a hard night. And I can punch. My last four wins have all come by stoppage. I desperately want to become British champion and win the Lonsdale Belt outright….and I think I can.”

5. Sam Eggington (Commonwealth title challenger): “Lots of people have been bigging Sam up since he did quite well in Prizefighter. He’s big for the weight – big shoulders – and good stoppages over Denton Vassell and Shayne Singleton suggest that he can whack a bit.

“He looks very game and tough but, at top level, tough ain’t enough. Sam can be outboxed. He’d not want to be taking three and four shot combos from me. He’ll get busted up.”

6. Junior Witter (ex WBC light-welter champion): “Junior remains the gatekeeper to the division. He’s a typical Ingle gym fighter. In his prime, he was a very tricky switcher who was hard to land flush on and who could knock you out with either hand.

“At 41, he’s not what he was but it’s still a case of ‘Who needs him?’ He’d be a good name to have on your record but plenty still avoid him because he’s awkward and he can punch. But his legs have slowed and now he’s very beatable.”

7. Glenn Foot (unbeaten ex Prizefighter champion): “Glenn was an ABA finalist (2010) and is still unbeaten in about 14. He also won Prizefighter a few years ago and he’s had good wins over the likes of Chad Gaynor, Steve Pearce and Jason Cook.

“He was out for a while after almost losing his arm in a career-threatening machete attack and has done well to come back with a couple of wins but I don’t think he’s top, top level.

“I actually beat Glenn in the NACYP finals as an amateur. He was very rough and tough, ‘in yer face’ but a skilful boxer like me beats him every day of the week.”

8. Denton Vassell (ex Commonwealth champion): “Denton seems a decent guy and, no disrespect intended but he should retire now. He took a year out after Frankie Gavin smashed his jaw, then got stopped by Sam Eggington and badly beat up by the Ukrainian (Viktor Plotnykov). That wasn’t nice to see.

“Denton’s no longer competitive with the top boys in the division. Pity, because once he was a very dangerous fighter.”