BRADLEY SKEETE: “MY STYLE MAKES ME A HARD FIGHT FOR ANY WELTERWEIGHT IN THE WORLD.”

Penge punch picker Bradley Skeete intends adding a final bit of garnish to what has been a breakout 2015-16 campaign when he stars on the mammoth Cardiff Ice Arena bill on July 16th. 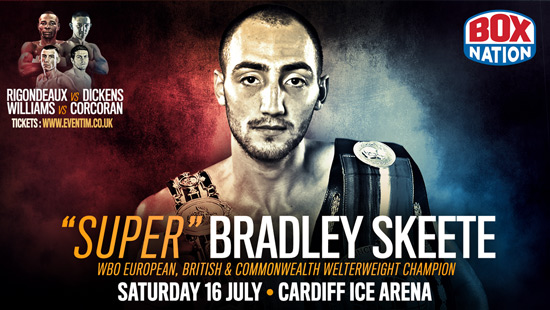 After a brace of impressive WBO European title defences over Mark Thompson and Stevie Williams at the tail end of last year, the 6ft 1in stylist from Al Smith’s iBox gym in Bromley delivered a virtuoso display to relieve home hero Sam Eggington of his British and Commonwealth welterweight belts on a rival Matchroom show in Birmingham last March.

And now the 28 year old south Londoner is primly placed to push on for the major international honours. Earlier this week, Glynn Evans caught up with ‘Super’ Skeete to reflect and speculate.

Four months on, how do you reflect on your British and Commonwealth title win over Sam Eggington?

It was definitely the finest performance of my career. I’d really put the work in, in the gym. My trainer Al (Smith) got the tactics ‘spot on’ and I stuck to the game plan. I possibly could’ve pressed it more to force a stoppage but that wasn’t part of the plan. Besides, Sam’s a very tough boy.

Though there was a bit of banter at the weigh-in and his fans were quite hostile during my ring walk, that just geed me up. The vibe was actually like being on holiday. I had almost 300 fans with me and felt really happy.

What aspects of your game have you been focusing on since, to prepare you for your assault on the major international belts?

You can always improve your strength and conditioning and gain experience but, stylistically, I don’t think I have to change too much. Already I’m a hard fight for any welterweight in the world. I’ve got this ‘nice guy’ image but my strength, toughness and grit always shock opponents.

What significance do you place on winning a Lonsdale Belt outright?

Huge. The Commonwealth belt is a bonus that could open doors for fights against Africans, Canadians and Australians down the line but, right now, my main concern is getting the Lonsdale for keeps.  Unless, I’m offered something major, I want my next three fights after this to be British title defences and ideally two of them will happen this year.

After fighting on undercards, I now want to top bills. I had so many of my fights at the York Hall coming through, so how fantastic would it be to go back there as a defending British champion, everybody talking about me as the main event?

Who do you view as potential challengers?

As champion, I don’t need to call out names. Let them call out mine. Frankie Gavin is the only blemish on my record (23-1) and it’s a fight I still believe I won. I’d like to address that if it can be made but where is he? He’s gone underground.

I could fight Sam again and Dale Evans, who put up a very good challenge against Sam at short notice, also fights on the Cardiff bill so that could happen.  Shane Singleton’s returned with a couple of good wins but I think I beat all of them, especially fighting at home and with a champion’s confidence.  I intend to pick them off, one by one.

A logical future step would be to challenge Italian veteran Leonard Bundu for his European crown.

That would be a great fight for me; a nice belt and a good name to have on my record. He’s performed at world level so it would push me up there. That’s the kind of fight I need.

And I’d be very confident. I’d need to stay switched on but I believe my style would be all wrong for Bundu. He’s 5ft 6in short, 41 years old and would stay right in front of me. I don’t think he’d cope with my reach or movement. Frankie Gavin let Bundu get close and rough him up but I wouldn’t. I’d run away with it on points.

Already the IBF rank you eighth in line to Kell Brook and the WBO list you as number six contender to their champion Jessie Vargas. Are you ready for those kinds of tests?

But Vargas? Most definitely. If Sam Eggington had beat me they were talking of getting him a world title fight so why not me?

Vargas moved up from light-welter last year so he isn’t massive and, like I say, my style gives anyone in the division problems. If I got my tactics right and performed at my best, I definitely think I could beat him.

Finally, what do you hope to get out of your 10 round WBO European title defence against France’s one-time European title challenger Alexandre Lepelley in Cardiff?

This will give me a low pressure run out and keep me sweet with the WBO. I’m not looking past Lepelley, mind. I refuse to take my eye off the ball. I intend to make a statement for all those who are queuing up to take my belts.