South African super-puncher Zolani Tete made an explosive return to the Liverpool Echo Arena by claiming a seventh round stoppage against Mexico’s Jose Santos Gonzalez. 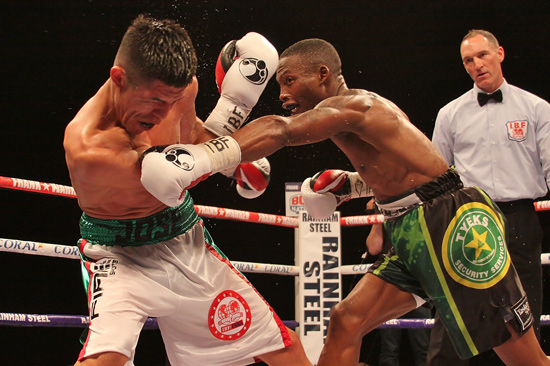 ‘Last Born’ looked eager to impress the Scouse crowd, dictating the pace of the fight from the first round. The polite and softly spoken bantamweight looked a completely different person in the ring, toying with the Mexican at will.

The former IBF World Super-Flyweight Champion looked in spiteful form as he landed several big hooks on his opponent. Tete, from Mdanste in the Easter Cape, lived up to his explosive reputation by dropping Sanchez in the second round. Gonzales looked hurt but was able to beat the referees count and return to the action.

Touted as one of the best boxers to come out of Africa in recent years, Tete justified the hype by delivering a near punch perfect performance for his Liverpool fans. The clinical southpaw landed several precise shots on Gonzalez, who struggled to deal with the African’s speed and movement. The fight was finally won in the seventh after Gonzales was dropped for a second time. The tough Mexcican beat the referees count but was caught by another big shot which ultimately ended the bout. Gutsy Mexican Gonzalez was in no state to continue and the referee ended the contest.