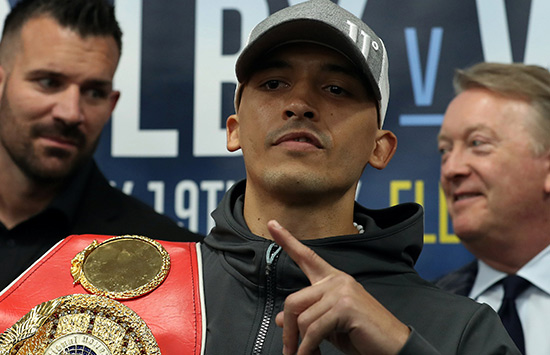 For his Fighter Diary debut, Lee Selby casts his mind back to the end of January when the blockbuster defence of his IBF world featherweight title was formally announced at the fight venue – Elland Road in Leeds. It was a lively coming together between Lee and his challenger Josh Warrington and, on Saturday, they get to do it for real on the pitch in front of a baying crowd…

THE OPENING PRESS conference for my world title defence against Josh Warrington a couple of months back really didn’t throw up any surprises for me.

There was nothing unexpected, just a lot of noise from a load of people behaving like monkeys. It was hardly intimidating, but it is what it is.

I didn’t take much from the meeting, other than thinking Warrington came across like a bloody schoolboy. I think he lost a lot of fans across the country through the way he acted and there was a load of comment on it on social media.

He lost lots of fans – not in Leeds, of course – but the neutrals weren’t impressed with him. I don’t think he will do the same this week because he just made a fool of himself.

It all meant nothing to me because it was just a press conference and I’m not going to be fazed by anything like that.

Fighting at a football ground isn’t new for me because I have boxed at one before. I won the WBC International title in Hull at an outdoor event and I have also boxed in front of full houses at places like the 02.

So I am relatively experienced in these sorts of situations. He is not.

I know how I am going to react to the big occasion, but I don’t have a clue how he will deal with it.

People talk about this being Warrington’s big night, but this is what I have been working towards as well after starting at the bottom on the small hall shows, with no TV backing and little money.

I have worked hard in getting up to fighting in stadium fights and I am looking forward to the opportunity of showcasing my talents to such a wide audience.

My route is mapped out for me now and that is to come through this one unscathed and go straight into a fight with Frampton.

My preparation has been business as usual and exactly the same as I usually do. I’ve been out to LA training and sparring – my tenth time of doing so – and I am treating this the same as any other fight.

I don’t train for the opponent, I train to get myself right and don’t worry about anything else. As long as I am right, that is all that matters.

I hear talk about workrate where Warrington is concerned and, although I haven’t seen a full fight of his, all I see is just normal boxing. Nothing spectacular, nothing like one of those top Mexican fighters.

I’ve read that people think he might be getting me at the right time but I am a very young 31-year-old who has lived the right life. I do everything right so I really don’t think the timing of this fight comes into play.

The weight – as Carl Frampton suggested – won’t be an issue either because, although I am a big featherweight, I have come in under the limit every time I have boxed and I have been at the weight since maybe 2008-09.

I’ve done it every time and even though it is difficult, if it wasn’t I am in the wrong weight class. We are in an era now where people get down to the lowest weight possible to be the strongest they can on the night and I am just doing the same.

I wouldn’t be able to compete at my natural weight because everyone else is going as low as they can.

Featherweight is the place to be at the moment because the big fights are being made and the division is knitting itself together, what with Gary Russell fighting Joseph Diaz, myself and Warrington and Leo Santa Cruz v Abner Mares coming soon.

There are some massive fights to be made and we are all on the same sort of timeframe now. As long as I win then more big fights can happen.