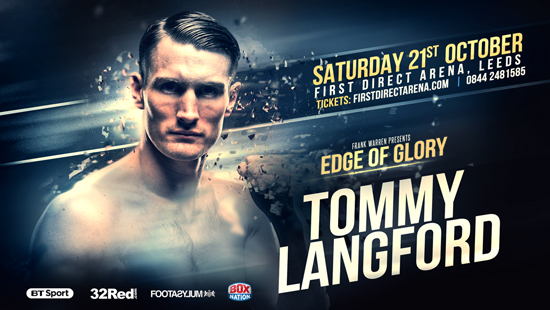 The former WBO Intercontinental belt holder, now ranked #11 with the WBO, will fight over six rounds against an opponent to be confirmed. 28-year-old Langford is determined to get back to winning ways after his first career loss to Avtandil Khurtsidze last April in Leicester.

“Frank recognised that I needed to get back out soon so I’m delighted to be fighting on the undercard of Josh Warrington’s IBF eliminator,” said Langford. “It’s always a wicked atmosphere in Leeds and hopefully my fans can add to that on the night.

“I’m just happy to be back out fighting. I don’t know who it will be against but it doesn’t matter to me, I just want to get out and get the job done, ready for the British title fight next.

“I’ve learnt from my loss and won’t make that mistake again; I’ll be polished and ready and I will return to the top.”