BROADWAY BECKONS FOR A STAR IN THE MAKING 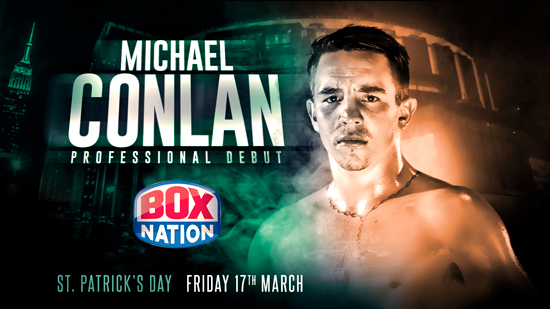 There cannot be too many fighters who get to top the bill on their professional debut, much less thousands of miles away from home in New York at the Theater at Madison Square Garden.

Such is the impression Michael Conlan has made on his new paymasters at Top Rank, that is exactly the stage they have laid on for this charismatic and highly-skilled operator.

Talk about making an entrance.

As Belfast’s top dog, Carl Frampton, reflected at the weekend, his debut was a rather more low key affair, down the card in a four-rounder at Olympia in Liverpool.

Conlan, however, is far from an unknown quantity making the leap into the professional ranks. He was a celebrated amateur and Olympian and the Irish public do not reserve their adulation for just the pro boys, they revere their top amateur stars in the same way they would a Frampton or a McGuigan.

The backing of such a support and already being a household name spares Conlan laying down the early building blocks in his pro career. The foundations are already in place, his name is already very much out there and all he has to do is live up to his lofty billing.

The fact that some 2,000 fans are said to be making their way over from Ireland to the snowbound Big Apple for his six-round opener against the 4-4 Tim Ibarra is astonishing and says everything about the love of the sport in his native Belfast.

Conlan was the pick of the litter from the 2016 Olympians even coming home without a medal. His profile probably only increased following his reaction to the diabolical decision he was on the wrong end of in the bantamweight quarter finals against the Russian Vladimir Nikitin.

Hard though it may have been for him to take at the time, it has certainly not hindered his professional prospects.

He secured a deal with Bob Arum’s organisation and, so highly do they rate their capture, Top Rank are pulling out all the stops to showcase him to the US fight public.

Launching his voyage on St Patrick’s Day is a shrewd move by the canny Bob and I wouldn’t be at all surprised if this becomes an annual event in the Big Apple.

Conlan himself is going the right way about it, immersing himself in the US fight scene in California with trainer Manny Robles at ‘The Rock’ gym in Carson, as well as relocating his young family.

Being in and around the US boxing circuit full-time will serve him well and will enable him to make himself known to the American market, much more so than making flying visits from home.

If he plays his part in as many thrillers as brother Jamie then it won’t be long before watching his fights on TV comes at a price.

For now though, it is about catching the public’s imagination and I, for one, think Bob could be onto a winner with this boy.

I am delighted that BoxNation viewers will be able to watch his career unfold live and exclusive in the UK from 1am on Saturday morning and I suspect it will become a journey well worth keeping tabs on.