Brook must be a masochist to fight Triple G, says Arum

British fighters are all masochists – they must like getting hit. So says top American promoter Bob Arum. 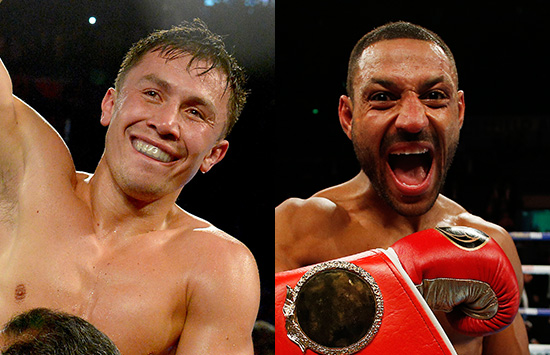 Arum, still bobbing along at 84, asks:”Why else would Kell Brook be fighting Gennady Golovkin?”

So will this be another Alvarez-Khan?

”Of course. British fighters have a reputation for being masochists. Amir Khan was a a masochist when he fought Canelo and Brook is a worse masochist for going in with one of the best middleweights of all time. And going up two weight classes to do so.”

But Bob adds:”That’s an English fighter for you. They have a lot of balls and they take chances. That’s the way it has been for the fifty plus years I’ve been in boxing.”

According to Arum, the planned unification welterweight title fight between Brook and his man Jessie Vargas fell through because Britain elected to opt out of the EU.

“We had a deal in place for the fight to take place over in but these people in England were convinced to leave the Economic (sic) Union and the pound collapsed.

“That meant Eddie Hearn was at risk very heavily and he decided it was too great because now the fight was costing him twenty per cent more than he was prepared to spend.

“On top of this he was hoping to do Golovkin and Eubank jnr which was a big fight but Eubank and his father acted crazy, wanting control of all the tickets and the undercard.

“Then Brook said he’d fight Golovkin for the same money that Eubank was getting so that was the way out for Eddie.”

Does Manny need the money?

There is some speculation that Manny Pacquiao’s planned return to the ring on October 29 or November 5 is a because he needs the money.

Not that he is broke- far from it. His total wealth is estimated at around $250 million. But he has heavy tax bills to pay both at home and in the US, is known to be overly generous with his cash to friends and family and will need to stockpile a fighting fund if he is to undertake a future run for the presidency of his native Philippines.

Promoter Bob Arum says a number of potential opponents are in the frame, among them Danny Garcia, Jessie Vargas and Terence Crawford but rules out any re-match with Floyd Mayweather jnr.

“It certainly will not be Mayweather because Mayweather has indicated to people who are close to him that he has no intention of returning this year. I don’t know if he’ll ever return unless he gets a guarantee that is outlandish” says Arum.

Arum had previously planned an October 15 fight in Mandalay Bay Events Center, but scrapped it due to upcoming votes in the Philippine senate of which the Pacman is a member.

Be interesting to see who bids for it, whether meddlesome dad will accept the deal or order his boy to hand back to belt and withdraw him from what could highly dangerous encounter. What do you think?

Traditionally boxers have always been the most generous of sporting folk, both with their time and money – witness David Haye’s £100,000 donation to the stricken Nick Blackwell from the proceeds of his last fight.

We hear of another fine gesture from a truly noble artist, the WBO lightweight champion Terry Flanagan.

After his postponed title defence against South African Mzonke Fana was moved from home town Manchester to Cardiff last night the Turbo paid for the coach transportation and fight tickets for 200 of his fans. Nice one, Tel.

Praise indeed for Tyson Fury from Lennox Lewis, who warns Anthony Joshua to steer clear of him for some time yet.

Golovkin should not be allowed to fight you and everyone will see why in September.

Sounds like sour grapes of wrath from Chris Eubank jnr to Kell Brook.

The old man is a buffoon. His idea of negotiations is like ‘I want a 1,000 tickets’. What does he think we pay the bloody fighters for? Ticket revenue is the income for the show. It is all about what he wants and thinks he can get.

Frank Warren notes,not for the first time, that Chris Eubank snr is not quite the ticket.