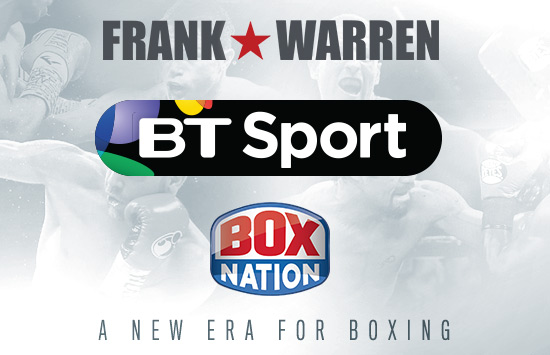 Just like Buster the boxer dog in the latest John Lewis TV ad, boxing itself is bouncing high in 2016 – which, allied to the buoyancy of BoxNation, is the reason BT have linked up with the Channel of Champions in that historic deal announced this week.

The trampoline effect has seen the popularity of the sport soaring to new heights in Britain, which, with more than two fistfuls of world champions is now the globally most successful boxing nation – way ahead of the once prolific USA and Mexico.

The new small screen punching partnership will be bouncing even higher from next year as with 30 domestic shows annually – 20 of them to be screened live – by BT as well as BoxNation – we see just how much burgeoning talent there is among Britain’s stars of the future now being nurtured by Frank Warren and his team.

As both Hall of Fame promoter Warren and BT’s commercial director Josh Smith have pointed out, this is a whole new brawl game for boxing, one which levels the playing field in the televising of the sport.

Warren – again named voted Europe’s top promoter by the WBO, together with Queenberry’s Jason McLory as leading Inter-Continental matchmaker – are going to be busy bees indeed as the planning gets under way for a bumper 2017.

Expect some football-type transfer movement in the marketplace as fighters struggling to get regular exposure elsewhere ponder switching stables – and TV channels.

“This puts a new spring in my step,” says Warren.

Well, it should. The historic deal has had quite a lengthy gestation period but it is one which has set the boxing world buzzing.

And it won’t need a dog on a trampoline to produce a whole host of block-Busters!

Just what the doc ordered

I use the term deliberately because of its ever-increasing support among the politicos.

As I wrote here last week new US president-elect Donald Trump, love him or loathe him, is a long time boxing buff who helped make Atlantic City a fistic citadel and will certainly promote its cause in the White House.

And our parliament here has another new champion in the freshly-appointed shadow sports minister, one Dr Rosena Allin-khan.

Her appointment may have gone relatively under the radar but she was surprisingly named as part of Labour leader Jeremy Corbyn’s ministerial reshuffle, replacing former taxi driver and Millwall fan Clive Efford.

Interesting lady. The Tooting MP succeeded another boxing supporter Sadiq Khan – no relation – who is now London mayor in a by-election and has created a record by becoming shadow sports minister after just 105 days – the quickest ever promotion for a new MP in UK politics.

Moreover she is an ardent boxing fan, herself an amateur boxer, training at Balham Boxing Club, where she is also the team doctor.

“I love boxing,” she says.” “As a keen boxer, I was honoured to be asked to become shadow sports minister. I’m really looking forward to combining my background in health with my passion for sport especially boxing.”

Are you listening, British Medical Association?

A Muslim mother of two, Dr Allin-Khan was born in Tooting. Her Polish mother had been a singer in the Polish girl-band Filipinki, who met her father, originally from Pakistan, while the band was on tour in London.

A former hospital, junior doctor, the 38-year-old Cambridge graduate 38, will now shadow Tory sports minister Tracey Crouch, herself a a boxing aficionado, together like the female chair of the All Party Parliamentary Boxing group, Charlotte Leslie, who regular dons the gloves for sparring sessions at a club in Bristol.

With former Oxford boxing blues, the Lords Colin Moynihan and Tom Pendry fighting the sport’s corner in the House of Lords, together with one-time Board of Control steward Lord Sebastian Coe and current steward Baroness Golding, the sport can be assured that it is correctly punching its weight politically.

Can’t make up my mind whether this weekend’s ‘superfight’ between Sergey Kovalev and Andre Ward in Las Vegas – described by Boxing News as ‘a match made in heaven’ – will be a classic or a stinker. 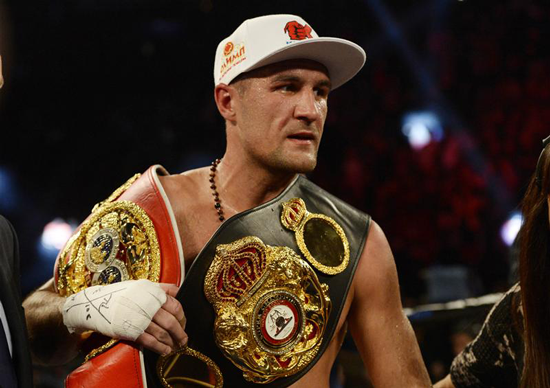 Like the eventual outcome, it could go either way.

I have always liked Russia’s Krusher, one of the original Beasts from The East. His body punching is phenomenal.

In a tear-up he’d be favourite but ‘Son of God’ is a class act who could possibly box his ears off.

It could be a bore or a war between the perfectly-matched pair with a trio of light-heavyweight belts at stake, should of Ward elect to hit and hop it while Kovalev wildly threshes away.

But at least they’ve actually got it on, which is great for boxing.

The ring adage suggests a boxer should always beat a puncher. That seems the most logical outcome but you know what? A draw wouldn’t surprise me.

We’ve got nearly 60 fighters on the books and we’re looking for the best talent. There are other fighters out there on other channels who may not be happy where they are. If they’re out of contract, they can come and have a chat with us. We are competitors; we’re in this business to deliver the best for our customers. That’s what this is about. I’ve got lots of names (of fighters) in mind. 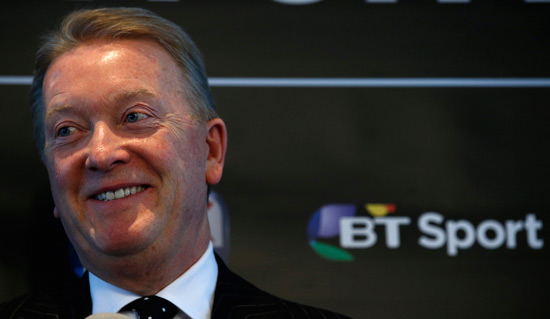 Probably, for a variety of reasons. The guys that feel like they’re not getting the attention, and there will be those guys. It’s a brutal business in a sense that if you’re not performing you’re not going to be getting the attention. So, therefore, there will be guys who don’t feel like they’re at the top of our priority list, and to be honest with you they might not be. We might be looking for guys to let go, and there might be others that might say I think I might get more attention over there.

Eddie Hearn is asked whether Matchroom may lose some Sky fighters to BoxNation over the deal with BT.

Hey you! Carl Froch don’t judge who is credible or not. You are another clown who talks too much without stepping up to actually do things.

Gennady Golovkin is quick to counter-punch.

My life will never be complete again because of the passing of Muhammad Ali. The world itself was blessed to have him.He was like a total eclipse. You only see something like that maybe once in a lifetime. t. The world will mourn for a long time, not so much for the man but for this energetic talent, this piece of art.

A touching tribute to The Greatest from George Foreman.

Who knows? # TysonforPrimeMinister coming soon, if Donald Trump can do it, so can I #beliefandfaith # neversaydie.

Still in there never missing a tweet – Tyson Fury, now aka Riaz Tyson Muhammad. Or so he says.

Ali didn’t charge me a penny but I gave him some cod and chips.

How the late British heavyweight champion Jack Bodell said he once rewarded Muhammad Ali for opening his fish and chip shop in Coventry.