BUSY WINDOW ON THE FIGHTING FRONT

With the January transfer window in football closing on Tuesday night after a relatively quiet month of business, it was perhaps fitting that we were in position to announce some significant squad strengthening of our own last week.

One thing is for sure, we certainly won’t be found wanting for numbers when it comes to fulfilling our fistic fixtures this year. Our young squad now possesses incredible depth and contains no shortage of talent.

Our most recent clutch of signings include Sunny Edwards – who is actually older than he looks at 21 – the 3-0 flyweight and younger brother of Charlie, who last year challenged for a world title.

Sunny is a skilful little operator who is not lacking in charisma and I am looking forward to pushing him along towards title contention. You can take a few shortcuts in the flyweights due to it not being an over-populated division, but we will let him have a little paddle first and find his feet before plunging him into the deep end.

Time is certainly on his side and we will get him the fights he needs to properly learn his craft.

The welterweight Ekow Essuman is another hugely talented prospect with just a single pro fight under his belt to date. As an amateur he mixed with the elite and scored eye-catching victories over the likes of our own Tommy Langford, as well as Anthony Fowler, and was rewarded with a place on the GB Podium squad.

It is good timing for the Nottingham-based Ekow to be joining our team considering we are soon to be starting what will hopefully develop into a series of shows in the East Midlands – the first being at the Leicester Arena on April 22. 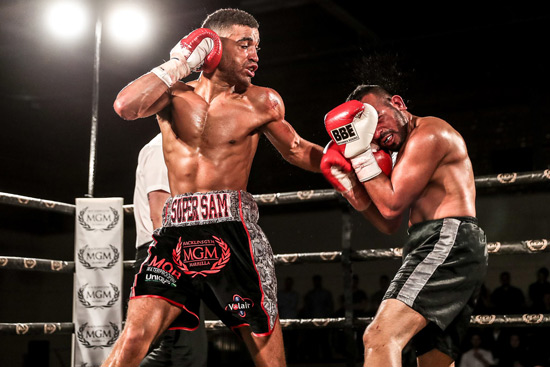 Liverpool’s Sam Maxwell is one who is more than ready to hit the ground running in the pro game, given his extensive top-level experience in the amateurs.

The 28-year-old was a member of the GB squad for five years, while picking up professional know-how in the World Series of Boxing over the five-round distance.

He will hold no fears over stepping up, bearing in mind he has twice shared a ring with Vasyl Lomachenko, so he is one who won’t be requiring a lengthy apprenticeship.

The middleweight Troy Williamson is another who wants to take the High Road, with the 25-year-old stating that he wants the British title – currently held by Tommy Langford – within the next 18 months.

Like Maxwell, he also shares a background of Team GB and WSB, but feels the professional game is more suited to his attributes.

Williamson hails from Darlington and will benefit from our plans to return televised boxing to the North East in order to showcase the talents of fellow local lads Josh and Kalam Leather, Joe Maphosa and Tommy Ward.

I really do believe our stable contains the finest young talent in the country. It is now all about a building process, which for us, is a three to four year project.

Within that timeframe, these are the guys who we envisage being up there challenging for world titles.

All of our new intake have got excellent amateur pedigrees, most of them have been in the GB Podium squad, but elected to turn pro as opposed to signing up for an Olympic cycle.

The fact that they have chosen us to guide their careers, knowing our history of developing young fighters, is very pleasing.

Of course, it is great for boxers to go to the Olympics and fulfil their dreams if that is what they want to do, but many feel they have more of a chance of making quicker progress in the pro game and moving their careers towards a world title.

Our former charge Naseem Hamed is a good example of that.

I now don’t think anybody has the wealth of talent we currently possess in young fighters and, for me, it is what the game is all about.

I know people must be wondering how we are going to successfully accommodate our huge squad but, believe me, we have more than enough shows planned to do so.

These young fighting men don’t just sign up without doing their homework, they all know we are good at what we do and nurturing prospects into champions is my favourite part of the job.