BUTLER DETERMINED TO MAKE HISTORY IN 2016

Ellesmere Port star defeated Flanagan in the amateurs, but tips him to beat Mathews in world title clash.

‘Baby Faced Assassin’ Paul Butler is more determined than ever to become the first Englishman in over 100 years to drop down a weight and win a second world title. 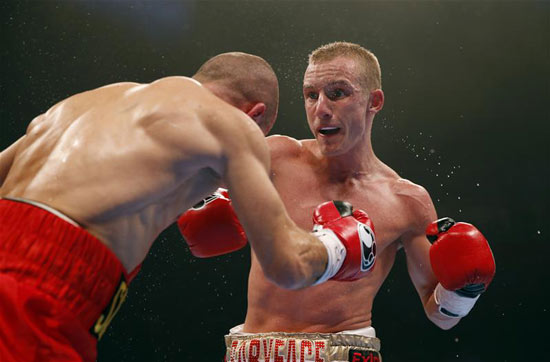 The red-hot 27-year-old makes the first defence of his WBO European Super-Flyweight crown on Saturday 13th February at the Liverpool Echo Arena, exclusively live on BoxNation.

Since his loss to South Africa’s hard-hitting Zolani Tete, the Ellesmere Port man has returned with a bang with three knockouts wins, his latest coming against Silvio Olteanu at the Manchester Arena in December.

Butler, who had no desire to be eased back into action following his defeat, has high hopes for 2016 and is looking to continue his red-hot run.

He said: “Obviously my main aim for the new year is to get a world title shot and then win it. I won one in 2014 and then came short in 2015 which was gutting. I’m working my way to another word title shot this year and this time I’m going to win it and keep hold of it for a long time,”

“Bob Fitzsimmons record is something that I’ve wanted for a long time and I’m confident this is my year. Training has been going really well, I’m feeling fit and ready for whoever is put in front of me.”

Butler, who faced Flanagan three times as a school boy, is confident his former foe will come out on top.

He added, “It’s got all the makings of a brilliant fight. I beat Terry twice as a school boy and it’s really nice to see him progress from when we were 11 and 12 to winning a world title himself. Terry has always been tough as nails, I remember how we always used to meet in the Manchester finals. He’s flying at the moment and I think he’s going to be the red-hot favourite,”

“He’ll have to be cautious though, Derry Mathews is one who always looks like he can upset the applecart but I can see Terry coming out on top, he’ll be very tough to beat.”