Ellesmere Port star Paul Butler will face Thailand’s Petchbarngborn Kokietgym in a showdown that should Butler win will guarantee him the mandatory position with the WBO. 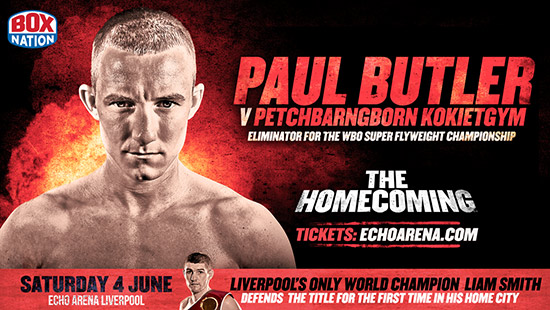 The bout will act as chief support for Liam Smith’s massive homecoming world title defence at the Liverpool Echo Arena on June 4 and will be broadcast live and exclusive on BoxNation; the channel of champions.

Butler’s huge world title eliminator will also double up as the first defence of his WBO International Super-Flyweight Title. Red-hot Butler edged closer to another world title shot last time out at the Liverpool Echo Arena where he emphatically stopped Mexico’s Sebastian Sanchez in nine rounds with a crunching left hook to the body.

Kokietgym, the WBC Asian Boxing Council Continental Super-Flyweight Champion, fights out of Bangkok and is a veteran of 46 fights. With 18 knockouts from 38 career wins the terrifying Thai will be looking to cause an upset on his debut on UK soil.

With the solitary blemish on his ring record now firmly consigned to memory, Butler is gunning for another shot at a Super-Flyweight title on his return to the Echo Arena. 27 year-old Butler, 21-1 12 KO’s, is more determined than ever to become the first Englishman in over 100 years to drop down a weight and win a second world title.

“I’ve not seen him box but what we know is he doesn’t really like to work at a high work rate. He throws between 30-40 shots per round so we want to take him out of that comfort zone by working him and that means me throwing between 80-100 shots,” said Butler.

He added: “He’s a very good fighter if he’s getting his own way but we plan on making him work and taking that away from him. This is a massive fight for me as it will get me back to where I belong; the world level and winning a world title.”