‘Baby faced Assassin’ Paul Butler stopped Mexico’s Sebastian Sanchez inside nine rounds to claim the vacant WBO Intercontinental Super-Flyweight Championship. A crunching left hook to the body of Sanchez was enough to earn Butler the 21st win of his career. 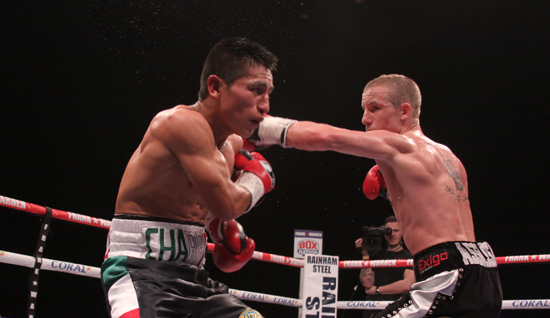 The Ellesmere Port ace used his lightening quick speed to take control of the bout early on. Butler put on an impressive performance in front of his home crowd, which included rival super-flyweight Jamie Conlan.

27 year-old Butler dominated the bout throughout, landing a series of punishing hooks and jabs on the nippy Mexican. Sanchez proved his toughness by taking everything Butler threw at him despite being caught with some powerful left-hand jabs.

The impressive Butler sent out a powerful message to the watching Conlan by systematically dismantling the gutsy Mexican with a near punch perfect performance in front of the rowdy Echo Arena crowd.