Butler service resumes as boxing throbs to the Mersey beat

Maybe it is something in the water, but fighters from both sides of the Mersey seem to have a common ingredient. The Latinos call it cojones but we know it as good old–fashioned balls. Or bottle as they call it down sarf…

Derry Mathews, Jazza Dickens, Ryan Farrag, Steven Lewis and Kevin Satchell are all gutsy Liverpudlians appearing on our March 12 blockbuster showr who are always up for a good scrap. 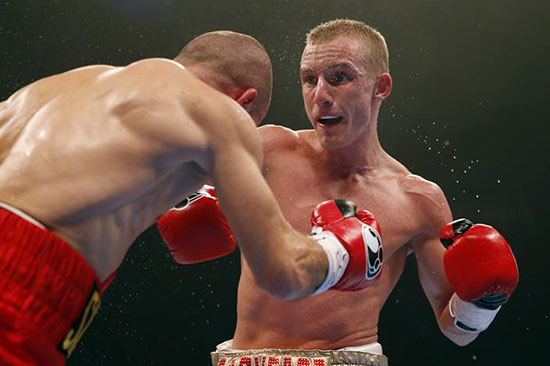 And from across the river, at Ellesmere Port, Paul Butler is of similar ilk. He’s been down, but he’s bounced right back up and I believe is on the cusp of becoming a world champion again.

The spiky 27-year-old will make the first defence of his newly-acquired WBO European super-flyweight belt on the undercard of the Terry Flanagan-Derry Mathews WBO world lightweight title bill at the Liverpool’s Echo Arena, an event televised live exclusively on BoxNation.

Since his defeat against the phenomenal puncher from South Africa, Zolani Tete, the Ellesmere Port warrior has made an impressive return with three successive inside the distance victories, culminating with his brisk conquest of the never previously stopped Silvio Olteanu at the Manchester Arena in December.

I’m backing Butler to be back on top of the world this year and hoping he can be matched with the unbeaten Belfast battler Jamie Conlan in a final eliminator for the WBO title (they are currently ranked two and three). And should the Japanese champion, Naoya Inoue, vacate as is anticipated, it could well be for the vacant crown.

So ‘The Baby Faced Assassin’ has all to fight for, and he still has one burning ambition. That is to become the first Briton for more than 100 years to step down a weight and win a second world title.

The last was Bob Fitzsimmons, who won middleweight, heavyweight and then in 1902, the light heavyweight championship.

Now that full Butler service has been resumed I believe he will do it as his determination, like his inbred Merseyside gumption, is unbounded.

Butler admits he was ‘gutted’ to lose to Tete, his new stablemate, who like another great former world champion appearing on the bill, Guillermo Rigondeaux (against Jazza Dickens) is a really class act.

Here at Queensberry Promotions our policy is to be a Palladium of pugilism, presenting not only the best of British but top quality fighters from around the globe to star in our shows.