CALLED OUT OVER A KEBAB

ANTHONY YARDE ENDED up keeping some unexpected company on a recent visit to one of his favourite haunts.

There was more than just a tasty kebab on the cards when he rocked up at Sheesh Chigwell because a chance meeting with a certain Frank Buglioni also turned out to be on the menu.

Two leading light heavies – one who wants to fight the other and one not so keen – and a mischievous restaurant owner only served to crank up the evening’s entertainment.

Anthony takes up the story…

“I actually saw him the other day in a restaurant and it was fine because it is not the kind of thing where we hate each other,” he relayed. “We are just in the business of boxing.

“I think I would beat him and possibly stop him. I don’t know what he really believes but what I don’t think is that he wants to fight me.

“I don’t think he wants it, although I feel that he called out my name before I mentioned his in what was a strategic move because people were getting on to him talking my name.

“I think he called out my name first to take a bit of steam off himself.

“It was funny because the owner of the restaurant knows me very well and he knows Buglioni to be a fighter in the same weight division as me.

“He said there is a guy here who boxes in your weight class and I said ‘who?’. He said it was Buglioni and I said ‘ok, I am coming upstairs soon’.

“He goes ‘I’m going to stir some sh*t’ and he went over to Buglioni because he knows one of his friends and he kept pointing at me saying ‘why don’t you fight him?’

“Buglioni is standing there laughing and I kept saying ‘he don’t want to fight me’. At the end of the night the owner really got onto him asking why us two don’t fight because it would be good because we’ve both got relatively big profiles.

“Buglioni’s words were ‘he hasn’t earned the right to fight me’.

“That is a new one when he fights Craig Richards who had one fight at light heavy and took him on at a week’s notice and Ricky Summers, who had just 14 fights at the time and a lower knockout ratio than me.

“So they deserved to fight him? It is just a big contradiction and it is why sometimes you should just keep your mouth shut.”

Is this from the same Wise Guy who ‘earned’ his shot at the British title after just one fight at light heavy and a 100 second blow out of a 21-24 (now 22-31) Latvian import?

NEVER LOOK PAST THE NEXT FIGHT 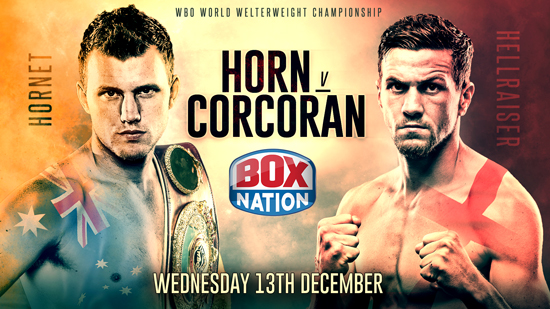 GARY CORCORAN SUSPECTS he is being overlooked by the Jeff Horn camp ahead of his challenge to the Aussie WBO world welterweight champion in Brisbane on December 13.

Team Hornet are perhaps a little giddy over knocking Manny Pacquiao off his world title perch back in July and have apparently compiled a wish list that includes Terrence Crawford and, er, Conor McGregor…

With reports emerging from Down Under this week suggesting Horn still has a fair bit of timber to shift in the final few days, perhaps the threat of Corcoran isn’t being taken as seriously as it should be.

“I think so because they are going on about having booked a venue for him to fight Terrence Crawford and they are calling out Conor McGregor,” said the Wembley man with a knowing snort.

“They are looking past me and say they have got a five-year plan.

“They haven’t got past me yet and they are not going to, so I don’t know where all this is coming from. They will have to start all over again when I beat him.

“If he takes this fight lightly and thinks I am easy to beat, he is in for a big shock. They think it is an easy fight, but they will see different on the day.”

In order to carry out his mission successfully, Corcoran knows full well he needs to watch his step – and his head – in an arena where there won’t be too many on his side.

It is highly probable the judges will be required on the night, so the Hellraiser needs to keep his cool and not give away any early Christmas presents in the form of points deductions.

“I need to watch all of that because he is very dirty with head. If he hits me on the back or side of the head I need to just get on with it and not do any of my dirty tricks.

“I’ve fought a lot of good fighters and I don’t think he has mixed in the same class, aside from Pacquiao – and he is not what he used to be.

“A few years ago, let’s be honest, Pacquiao would’ve knocked him out. So he beat his ghost, but he has got his name on his record and I would have done the same.

“I am convinced that belt will be coming home with me and we will have a new world champion in the country and in Frank Warren’s team.

“It could be life changing and lead to big fights, but I am not going to look past this and I’m only concentrating on what happens next.”

Coverage from Brisbane begins at 11.30am on December 13, live and exclusive on BoxNation

LEE SELBY WOULD like to dispel the notion that the reason he fights regularly outside of Wales is because he cannot shift tickets in his homeland.

The IBF world featherweight champion, who co-headlines at the Copper Box against Eduardo Ramirez in a fifth defence of his world title on Saturday, last fought on home soil in May 2014 for a WBC International title.

Since then he has hit the road and fought five times in London and once in the USA. He has regularly stated he would have no issue in heading to Leeds to accommodate Josh Warrington’s army of fans or Belfast for Carl Frampton’s adoring flock.

But not because he is not an attraction himself in South Wales.

“I am happy to fight anywhere and have travelled throughout my whole career,” pointed out the 30-year-old. “I might as well be a Cockney because this is my tenth fight in London – I have boxed here more times than I’ve boxed at home!

“There is something that goes around about me saying that I can’t sell tickets. The reason I haven’t boxed at home more often is that we haven’t got a suitable venue.

“We’ve got the Motorpoint Arena where I have boxed twice, headlined and sold out twice. The next step up is the Principality Stadium because we haven’t got an arena in-between, which is the reason I don’t fight at home.

“The Motorpoint doesn’t generate enough money and the Principality is too big.

“So back to the fight with Warrington, I am happy to travel and I think it sells best at Elland Road. He’s got all those Leeds United supporters so we will get it on there.”

We’ll look forward to it.

Coverage of Lee Selby v Eduardo Ramirez from the Copper Box begins at 6.35pm on Saturday, with the action starting on BT Sport at 7.45pm