Can big Josh knock Prince Charles off his perch?

Anthony Joshua will carry the hopes of the nation with him when he seeks to top up Britain’s quota of world champions back to an incredibly healthy dozen by dethroning the IBF title holder ‘Prince’ Charles Martin on Saturday night. 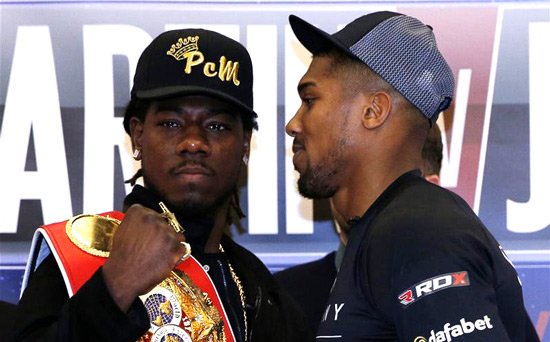 The inevitable Skyperbole this week will no doubt attempt to lead you to believe that this is the only heavyweight show in town, but I wouldn’t be at all surprised if a certain Tyson Fury pops up to remind everyone who the real king of the heavyweight swingers is.

I keep hearing this fight being described as being for ‘The’ heavyweight championship of the world, when – as I am sure big Josh would readily acknowledge himself – it is for a single version that only became available due to Fury’s obligations for a rematch with Wladimir Klitschko seeing to it that he was not in a position to honour a mandatory defence for the IBF.

The 29-year-old Martin duly claimed the crown in unusual circumstances, with a knee injury putting paid to the challenge of Vyacheslav Glaskov.

Which brings us to Martin, with 23 fights on his card, defending against Joshua with a tally of 15. If you examine their respective CVs, both are pretty much novices and neither have previously fought anyone of particular note.

They have a shared foe in Raphael Zumbano Love, who Joshua dismantled with ease inside two rounds under a year ago, while Martin was taken the distance a couple of months before.

So it is a great position for Joshua to find himself in, an opportunity to claim a portion of the heavyweight pickings against the most vulnerable of the champions.

On paper it is a big and intriguing fight between the two of them, but to be considered as the champion of the world, Fury is the one you need to beat.

I strongly fancy Joshua to do the business on the night although, to be honest, his performance last time out against Dillian Whyte did perhaps leave us with more questions than answers. Whyte, who is not yet at world level, did wobble him and found him a little bit too easy to hit. The fact Joshua triumphed after having to grit his teeth and dig deep is to his credit though and will serve him well in surely sterner tests ahead.

Whether Martin can provide one remains to be seen. Joshua is generally used to holding considerable physical advantages over his opponents, which he won’t enjoy against a 6ft 5” tricky southpaw.

They are both big, strapping fellas and anything can happen when such formidable forces collide, but with Joshua’s strong amateur pedigree behind him and home advantage in his favour, I think he will win it.

Having said that, I know that both Tyson and his trainer Peter Fury both fancy Martin. So will the unfancied champion upset the bookies’ odds on Saturday night?

To find out first hand, you can pay your money and make your choice!