Can Khan do a Leicester against canny Canelo? Let’s hope so

If you listen to some folk in the fight game, Genghis Khan wouldn’t stand a chance against Saul Alvarez, let alone Amir Khan. 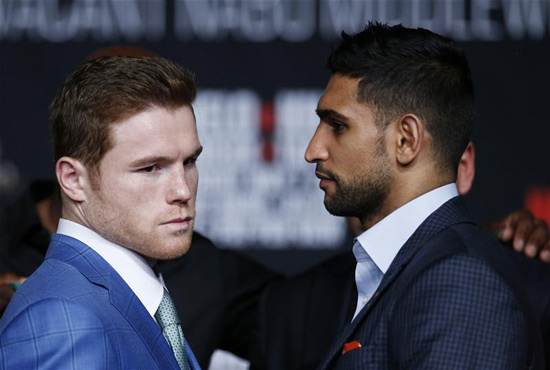 But that sort of reasoning certainly won’t faze the boy from Bolton who faces the most rewarding, fascinating but hazardous night of his life challenging for the WBC middleweight championship at the new T-Mobile Arena in Las Vegas on Saturday night, exclusively televised by BoxNation.

I’m not saying Amir can win this one, but the one certainty is that he will give it one hell of a shot and such an enthralling contrast of styles will hopefully be one of the great fistic spectacles of the year. But it is also one of the toughest-ever asks in boxing history.

As for Amir’s chances, well, the essence of sport is its unpredictability. You need look no further than the city of Leicester to appreciate that. That’s why I am not writing him off.

The problem with Amir is that his heart rules his fighting – and he admits this himself. I know I could get hurt by Álvarez in this fight,” he said only this week. “I have felt fear and will have that. Having no fear has been my undoing in the past.

Another problem is while he has fast hands, these are not heavy hands. Even as a light-welterweight when he was world champion, he was no great banger.

But he is such a game bugger, you can’t take that away from him.

He could have taken what I believe would’ve been a considerably easier fight against Kell Brook but, no, he wanted to make a statement and instead fight this guy, one of the sport’s supreme exponents.

I believe the only way bulked-up Amir can win is by boxing, but he has to win decisively in what is Canelo territory on Mexico’s festival day when there will be thousands of Mexicans in the capacity crowd trying to sway the judges.

Amir may be going up two weights, but I’ll be surprised if he can carry any great power up there because, as I say, he is not a dynamic puncher. It is not only about speed but also stamina in the later rounds, the question is, will he be found wanting in this respect?

He has got to be busy and fast in every round, but whether Canelo will allow him to fight his fight is the crucial question

Remember too, that Khan won’t have fought for a year and 12 months of inactivity at 29 is not the best preparation to face a complete, canny fighter like hard man Canelo

For me, this fight is purely about Amir Khan. We know what Canelo can bring to the ring. All the questions are about Amir, his weight, his stamina, his speed. If he’s got all those in sync, he’s got a chance of winning and causing an upset that will be talked about for years to come.

As well as surely getting him a gong in the Honours’ List that is well overdue.

Tomorrow: More from Frank’s Scrapbook on the fight the world can’t wait to watch