CANNY CANELO MAY HAVE THE MEASURE OF TRIPLE G 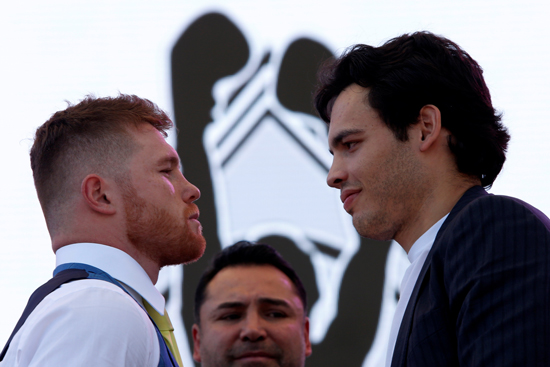 BoxNation and BT Sport viewers will have been in need of an extra shot of Expresso in order to go the distance in the early hours of Sunday morning.

The battle to keep eyes wide open was probably a more closely-fought contest than the one-sided drubbing Saul Alvarez inflicted on his countryman Julio Cesar Chavez jnr in Las Vegas.

I always made Alvarez a big favourite to win, but I think we all expected Chavez to make a fight of it, for a few rounds at least.

We were told macho Mexican pride would be the great leveller but, so certain were Canelo’s handlers over the outcome, they had his next opponent ready and waiting to step into the ring at the conclusion of a fight that ultimately turned into a procession.

Canelo simply boxed Chavez’s head off and, although I thought he might have stopped him, he can’t do much more than win every round.

It was like Chavez turned up for a party without bringing his bottle. His rationale afterwards, that he was reluctant to throw punches for fear of getting countered, was never likely to appease a an agitated audience.

It is just as well they had Gennady Golovkin up their sleeves to turn the jeers into cheers.

This was probably the best you were going to get out of Chavez. It was an exercise for the Mexican public holiday, a low-risk fight for Canelo that has set up the big one and that it what it was all about.

It has teed up a big fight that I actually thought wouldn’t happen any time soon – I suspected they would duck it. I think Alvarez really must fancy the fight now, based on Golovkin’s last performance, I would imagine.

What we have got now is the biggest fight in world boxing, without a doubt. It will be a huge-scale pay-per-view event in America between two top-drawer fighters that really shouldn’t disappoint.

We had hoped that one of these two would share a ring with Billy Joe Saunders this year, but this is a fight the world’s boxing fans want to see sooner rather than later.

After Golovkin and Canelo fight it out, there will still be a piece of the middleweight jigsaw missing. The WBO title will hopefully still be in Bill’s possession and he will be an obvious pick to fight the winner.

Who the winner will be, I’m not quite so sure now. I’ve got to be honest and say my tip was always with Golovkin in the early days, I really fancied the Kazak would do a job on him. I’m now not as confident as I was about it, based upon the fact that Alvarez looks to have really grown into it now.

I think he really does fancy the fight, so it should be interesting, to say the least.

What a shame our man Hughie Fury sustained the untimely back injury that prevented him making the trip to New Zealand to challenge for the WBO world heavyweight title held by Joseph Parker.

Had he stayed fit I am convinced we would now still be celebrating a new heavyweight champion and the second from the Fury family.

However, contrary to what the commentators would prefer you to believe, it is still only a matter of time before Hughie can prove he has got the beating of Parker.

Parker’s limitations were exposed by his lowly-ranked sparring partner Razvan Cojanu who, without carrying any obvious threat, managed to make the Kiwi look ordinary.

Despite his current status, Parker isn’t living up to his early promise and I truly believe Hughie will have too much for him.

There was a lot of name-dropping going on during the Saturday morning transmission on Sky, but you can forget about the likes of Tony Bellew or Dillian Whyte jumping the queue to fight Parker.

The WBO have made very clear that Hughie is the mandatory challenger and will be fighting Parker next – there will be nothing in-between.

The financials for the fight can remain as they are or, if Parker’s team want to change it, we can negotiate or go back to purse bids.

We’ve got 30 days to negotiate if they want to give up their previous purse bid and if terms cannot be agreed then the bidding process will start again.

The fight has to take place within 120 days.