CARDIFF CALLING AND AN ‘0’ WILL HAVE TO GO

If you could offer fans a choice from a matchmaking menu, the most appetizing option would always be the serving up of a tasty domestic dust-up – and if it is between two unbeaten and hugely ambitious fighters, so much the better.

That is exactly what we have cooked up for our Cardiff show on July 16 at the new Ice Arena.

Local favourite Liam Williams (14-0-1) – who defends his British and Commonwealth titles – and Wembley’s Gary Corcoran (15-0) will put it all on the line when we make what will hopefully be a welcome return to Wales, one we are particularly looking forward to.

For me – and I keep saying it – matches such as this are what boxing is all about. We want to make the best fights we possibly can, ones that fight fans will be counting down the days towards and I had no hesitation in making this fight happen.

Too many boxers are focused on the preservation of their treasured ‘0’ and are not prepared to take a risk. These two didn’t require any thinking time before signing on the dotted line.

It didn’t take long for a little social media spat to break out between the pair and I anticipate further entertaining Twitter-tattle before they engage for real at the fantastic new venue on Cardiff Bay.

This is such a hard fight to call and to say it is a 50-50 perhaps doesn’t do it justice. We all know Williams can pack a punch and, as a result of his power, has notched up under six rounds of boxing in the last 18 months or so, with having to call a halt to his progress due to a terrible hand injury in late 2014.

He certainly came back with a bang and judges are generally surplus to requirements when he steps into the ring.

Corcoran, however, is a different animal, having clocked up 81 rounds in his 15 bouts so far. He is tough, very durable and his backside is not at all familiar with meeting the canvas. He takes any fight that is presented to him and has put an end to two unbeaten records in his last three fights and, in his most recent, he claimed the WBO intercontinental title against the seasoned and very awkward Danny Butler.

Both fighters, naturally, have an eye on the full WBO world title in the possession of Liam Smith. Winning this would certainly be a step in the right direction, while Ahmet Patterson will also want to play his part in the qualification process.

I’ve been made aware of a number of social media posts encouraging the South Wales boxing public to support this promotion in order to make sure that Cardiff becomes a fixture on the fight calendar.

I am all for booking return dates if the show proves a success and it is not like we haven’t got a bit of previous when it comes to bringing big time boxing to the area. We built it up over the years with the likes of Steve Robinson, Joe Calzaghe, Nicky Piper and Enzo Maccarinelli, now let’s get it going again because they were great nights in Wales. 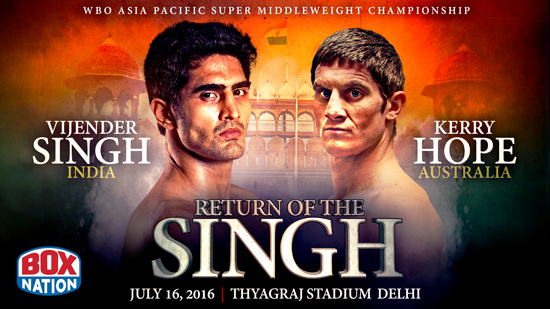 On the same date, over at the Thyagraj Stadium in Delhi, we are promoting the ‘Return to India’ of Vijender Singh, who is fighting for the vacant WBO Asia Pacific super middleweight title against Australia’s Kerry Hope.

It is a significant step up for Vijender after only six professional fights, but such was the level he competed at as an amateur, he is ready to push on and try and claim a top ten world ranking.

Promoting two shows on the same night on different continents isn’t actually breaking new ground for us. I recall in 1997 promoting Naseem Hamed vs Kevin Kelly at Madison Square Garden in New York – with Ricky Hatton among others on the bill – while back home at the London Arena, four world title fights were being fought for by Robin Reid, Adrian Dodson, Mickey Cantwell and Cardiff’s own Barry Jones.

Now a BoxNation analyst, Barry won his WBO super featherweight world title that night against Wilson Palacio. On July 16 he will have to choose whether to carry out his commentating duties in Delhi or Cardiff. I suspect, however, it will be a case of no place like home.

Tomorrow in Hubbard’s Cupboard: Has Tyson Fury finally lost it?