CARL FRAMPTON: “LET’S NOT GET CARRIED AWAY. WARRINGTON HAS ONLY HAD ONE GOOD PERFORMANCE!” 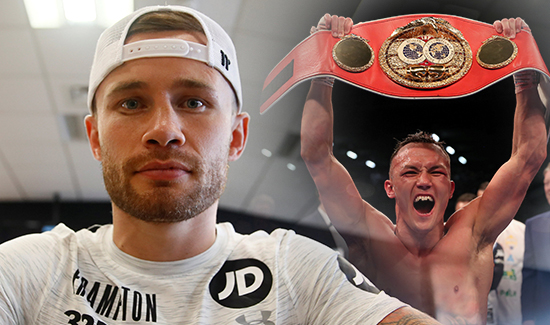 ‘Interim’ WBO featherweight king Carl Frampton is intent on delivering a demolition that’ll put the frighteners up IBF champ Josh Warrington, a ringside observer, when he fulfils his life-long dream of headlining at the Windsor Park football stadium in his native Belfast, this weekend.

Defending his belt for the first time, ‘The Jackal’, Northern Ireland’s only two-weight boxing world champion, is promising to smash Australia’s unbeaten Luke ‘Action’ Jackson and secure a salivating shootout with the ‘Leeds Warrior’ later this season.

‘The ‘interim’ belt looks very nice alongside my others in the cabinet but I’ll not call myself ‘world’ champion. It’s basically a belt for winning a final eliminator. Oscar Valdez is the real WBO featherweight champion. I want Warrington’s belt,’ insists the 31 year old Belfast boy who is managed by MTK.

‘Ironically, I bumped into Josh at the Trafford Centre recently and he called across: ‘Are you ready?’ I thought he wanted it there and then in the shopping mall but then he added: ‘….for Jackson, are you ready!’ Josh is alright. We always shake hands when we cross.

‘But we’re fighters and fighters fight each other. It doesn’t have to be in Belfast. I’m not a fool. I respect that he’s the champion. We could have it at a big indoor arena, somewhere neutral.’

The three-time world champion concedes that he was mightily impressed with the turbo-charged Yorkie who suffocated Barry’s long-reigning IBF boss Lee Selby over 12 rounds at Elland Road last May but insists perspective is required.

‘Josh fought far better against Selby than I expected – I didn’t think he could win – and he’ll have taken a good bit of confidence from that. But I don’t think we realised just how ‘dead at the weight’ Selby had become. At times, Josh was slinging Lee around like a wet lettuce!’ states Frampton.

‘But let’s not get carried away. Josh has only had one big performance. I twice beat Kiko Martinez far easier than Josh could manage… and that was after I’d knocked all the stuffing out of Kiko.

Warrington isn’t an easy fight for me but I’m just very confident that I’m better than he is. It’s about levels. I punch a lot harder and have beaten far superior opposition.’