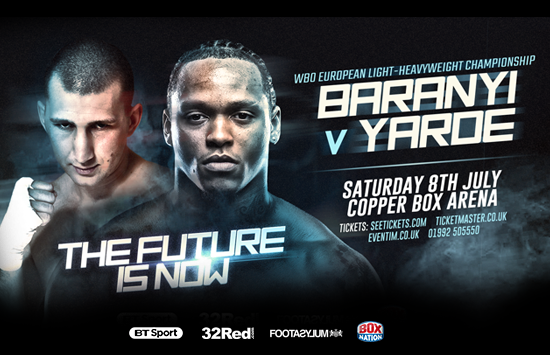 Victory over Richard Baranyi and the capture of the WBO European title would present Anthony Yarde and his team with a dilemma.
The winning of what would be his second professional title will parachute the light heavyweight right into the thick of the WBO world rankings and provide him with a visa to operate at elite level.
For Yarde, success at the Copper Box Arena on July 8, will leave him with a decision to make. Whether to stick or twist?
Logic will suggest he continues with his spectacular progression and builds on a career that has spanned only 11 pro fights. But, with a ranking, more often than not comes opportunity and there will always be the temptation to take the plunge if one knocks at his door.
Yarde himself hints that he would prefer to proceed with caution because, once he reaches the top, he fully intends to stick around at the sharp end of the sport.
“It is a catch 22 situation because you can overdo it and rush and once you go up you can’t go down,” reasoned the 25-year-old.
“A boxing career is very long-winded, so you can take your time and eventually get there, or you can rush and get there before falling down very quickly.
“There are different ways of going about it. You need to know your own ability and work at your own pace, while trying not to listen to people too much.
“People have been telling me to go for the British title since probably my eighth fight, but they are not in the ring or putting in the work in the gym.
“You have to be consistent, so when you do go for something like the British title, you have to keep in your mind that someone else is coming beneath you, or possibly above you who hasn’t had their shot yet.
“It is not only about the title or the challenge in hand, it is about after and being ready for that.”
While happy to field questions on his future intentions, Yarde is in no way disregarding the threat of the 18-1 champion Baranyi.
Yes, he fully expects to win and considers himself a cut above the 26-year-old Hungarian with 12KOs to his name, but he also knows
Baranyi presents a genuine threat and won’t be easily parted from his belt.
“There are definitely levels in this and that is what boxing is about. People are going to come to battle and think they are going to win.
“Upsets do happen in boxing and sometimes people pull it out of the bag, so I take every opponent 100 per cent seriously. People pose different threats to different people and can make some look bad and some look good. That is boxing for you and why I take nobody lightly.”