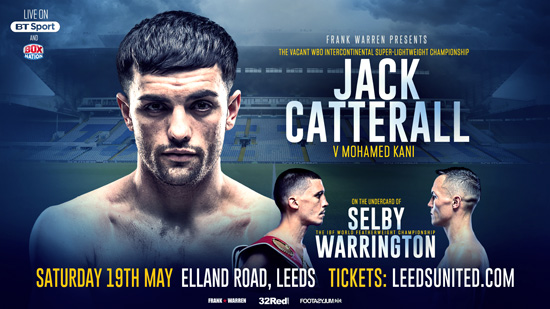 The former British Champion made a successful start to life under new trainer Jamie Moore in March, stopping Kevin McCauley inside the opening round at Preston’s Guild Hall.

‘El Gato’ faces stiffer competition in Kani (14-1) and knows that he must win convincingly if he is to stay in line to face the winner of the WBO Super-Lightweight clash between stablemate Terry Flanagan and Maurice Hooker.

“I want to be involved in big fights and I’m within touching distance of them,” said Catterall. “I need to stay switched on and focused for the task at hand. Mohamed has got a decent record and I won’t be overlooking him.

“The Intercontinental belt gives me a strong ranking with the WBO and puts me in line to face the winner of Flanagan v Hooker. It’s an exciting time to be involved in the 140lbs division and I’m determined to prove that I’m the best out there.”