Fast rising British star Jack Catterall came through the roughest fight of his career with a sixth round stoppage of Argentine wild man Gabriel Calfin to retain his WBO Intercontinental Light-Welterweight title tonight at the Manchester Velodrome.

It was a messy fight from the start with Calfin going into negative mode after feeling Catterall’s power early on.  The Argentine made it difficult for Catterall to get his own work off with plenty of holding and head use.  Surprisingly it was Catterall who was deducted a point first by referee Marcus McDonnell for hitting on the back of the head in the second round and he was deducted a further point in the third for throwing Calfin through the ropes in the third.

In the fourth Calfin was deducted a point for holding and a further point in the fifth for use of the head.  Calfin’s eye was closed now from the accurate shots that Catterall managed to land.

The doctor was asked to check Calfin’s eye in the sixth and was okay to continue, but Catterall decided to finish things off and plied the pressure on throwing plenty of punches with Calfin on the ropes.  The referee had seen enough and called a halt at 1:20.

Catterall was relieved to end the fight and make the first successful defence of the belt that he won against another Argentinian Cesar David Inalef in March.

Now unbeaten in 12 fights and also holding the WBO European crown, Catterall will have a short rest and get ready for the new season. 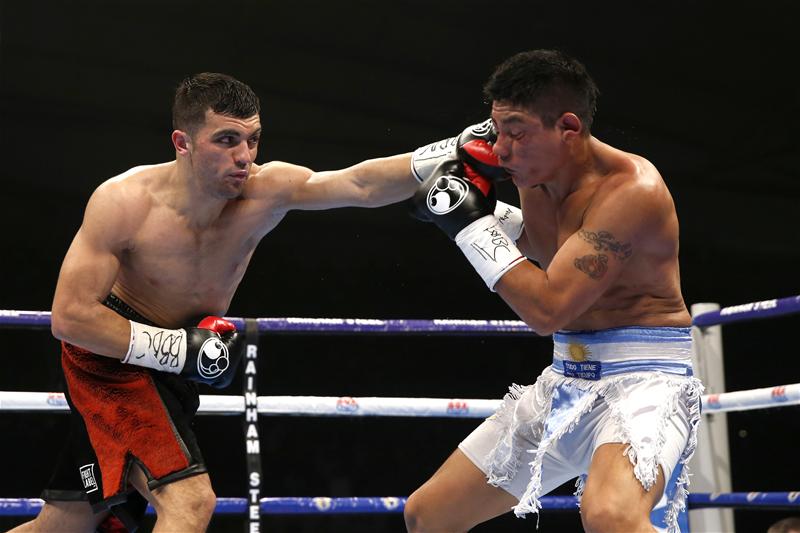 “That was a bit messy in there, but I’m delighted to get the win and overcome a tough and rough challenger,” Said Catterall.

“I tried to create some distance to get my punches off, but he was rushing in with his head and holding and making it impossible to work.  It was frustrating and I got deducted a couple of points but I managed to get a grip of it in the sixth and take him out,”

“It was an experience and I’m sure there are going to be more fights like that down the line so I know how to deal with it in the future.”