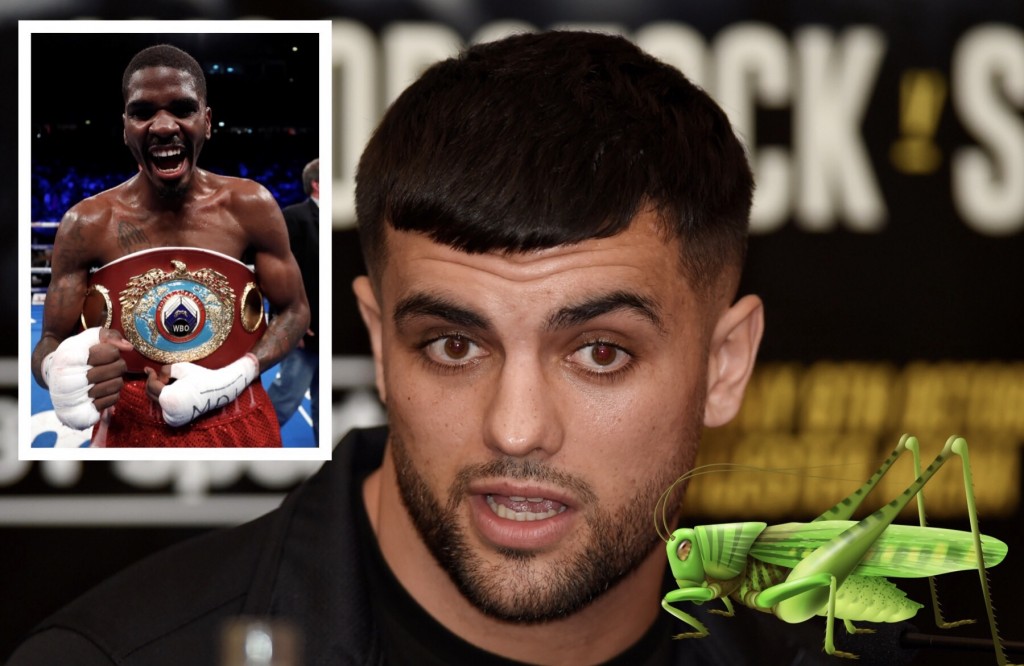 JACK CATTERALL IS hopping mad over being likened to an insect by his forthcoming world title foe Maurice Hooker.

The 25-year-old from Chorley – who returns to the ring at the SSE Arena, Wembley on April 27 – has worked his way into the mandatory challenger position for the WBO world super lightweight title held by the Texan Hooker.

The unbeaten Catterall undertook a little working holiday recently to watch Hooker make a second defence of his title against Mikkel LesPierre in New York, where the 29-year-old laboured to a points victory.

Since Catterall made himself known to ‘Mighty Mo’, the champion has acknowledged his challenge across social media by describing him as a ‘little grasshopper’.

Definition: A plant-eating insect with long hind legs which are used for jumping and for producing a chirping sound.

“He has since called me a ‘little grasshopper’ twice, which I am not happy about,” responded Catterall this week in his Fighter Diary posted on frankwarren.com.

“I don’t even know what he means by it or trying to get out of it.”

Insect references aside, Catterall is happy to have made the acquaintance of his future opponent and is convinced he will soon be parting him from his title.

“I treated it like a work trip, just in and out, because I am not a loud person and didn’t want to make too much noise.

“The way it unfolded went well for me, I got a bit of publicity from it and people know now that I am the No.1 contender. He certainly knows and I made a statement by travelling out to watch him, which I think was a smart move.

“I got to see him up close again for the second time and now I am even more convinced that I can beat him. I saw him before the fight, a couple of hours before the show started, and I wished him luck for the fight.

“So he knew I was there and then you will have seen the little clip in the ring when he got his victory. He let me know that I would be getting my shot at the title soon enough.”

The 23-0 Catterall, who calls himself ‘El Gato’, was not overly impressed with Hooker’s display against LesPierre after the champion was forced to make several return visits to the scales the day before the fight.

“Looking at the fight in comparison to when he beat Terry Flanagan, I would say that it wasn’t his greatest performance and he was much better against Terry and in his first defence.

“Whether him going downhill is to do with weight issues? I know he struggled to make it this time, so maybe that is why he didn’t perform.

“I didn’t think the opponent, even though he was undefeated, had really earned a shot at the title and I was a bit surprised over the success he had in snippets in the fight. I thought Hooker would make a statement with this guy and blow him out of the water, but it proved to be different.

“He is an awkward customer though with his long reach and the height, but if you look at my record I have boxed them all and had plenty of tall opponents like Nathan Brough, Tyrone McKenna, Tyrone Nurse – and Ohara with his extra-long arms!”

It is now a waiting game for Catterall due to Hooker’s stated intention of having an interim fight on home soil.

“I am still in the waiting room for my shot at the title and it seems like he is going to have another fight before defending against me. I’m hearing he will have a summer defence as a homecoming in Dallas and I’m hoping not too long after that we can get it on.

“I am prepared to go to America if needs be and there are a couple of ways I have looked at it. As a child, when you think of big fights, you always dream of winning in America and fighting away from home. I know he is the champion and you have got to make a statement and really take the belt off him.

“It honestly won’t bother me where the fight is, whether it is over here or over there.”