Champion stuff from our boys – the old-fashioned way!

Of all the world champions with whom I’ve been involved in my 30-odd years in boxing – and there are so many I’ve lost count – few have given me greater satisfaction and delight than the pair who left the Manchester Arena on Saturday night clutching their WBO belts.

What a great ovation Billy Joe Saunders was deservedly given for becoming the nation’s 12th world kingpin. His majority decision victory over the Irish title holder Andy Lee (how Marcus McDonnell scored it draw is beyond me) was the result of an intelligent strategy and brilliant gameplan.

And it was great to see Liverpool’s Liam Smith, in his first defence, using his class, power and guile to see off the brave challenge for the WBO super-welterweight title against Manchester’s Jimmy Kelly Jnr, who has the ability to come back from this to regroup and get himself back in the mix.

What pleased me so much about both their successes is that they have been with me since day one, staying loyal and finally being rewarded with the ultimate prize. Moreover, they have done things the traditional way, a virtue we value.

It was very touching afterwards to hear Billy Joe pay tribute to our association, saying that I had delivered for him and now he was delivering for me. He told the media ‘I’ve stuck with him since the beginning and I’ll stick with him right to the end’, Thanks Billy, I appreciate that.

Liam also said something similar when he won the title back in October. It was a great night for British boxing and fabulous to see Billy Joe join that doughty dozen.

When I signed him as an 18-year-old after the Beijing Olympics in 2008 I said he was the best prospect from that squad – even though he didn’t win an Olympic medal – and I believe I’ve been proved right.

Bill really did use his brain and I was really pleased with his performance. It was a compelling fight because both of them were trying to out-think each other, there were some dramatic moments, especially when Bill knocked Andy down a couple of times in the third.

I just thought it was a fascinating tactical fight to watch, one for the proper boxing fan, purist as well punter, to savour.,

Both Bill and Liam come from a traditional boxing background, as does Lee and, as far as I’m concerned, tradition is the name of our game, though not everyone’s it seems.

I was reading at the weekend how Barry Hearn now describes himself as the world’s top sports promoter – not just boxing, but all sports. He reckons that the traditional way of promoting boxing has gone and that now it is all about rap and razzmatazz and that his son Eddie is the only one who knows how to do things properly.

Blimey! They are so smug these days that they’ll probably eat themselves before they get to the Christmas turkey.

Let’s get real, without Sky’s money no-one would have heard of Eddie Hearn. Barry keeps banging on about what a genius his boy is because he made a blockbuster Froch-Groves fight at Wembley.

No he didn’t, as I recall, Matchroom didn’t really want the fight – it was Groves that made it happen.

Barry Hearn is a master at rewriting history – wasn’t he the one who said boxing was dead a few years back even when there were plenty of big shows going on? Actually it was he who was dead in the game, he’d virtually packed in promoting.

We are traditional promoters and I’m proud to say that. We do it the hard way, the old-fashioned way with time, the personal touch and investment.

When Hearn first got involved with boxing with Terry Lawless he said they didn’t want any of that showbizzy stuff, they wanted a return to a spit and sawdust atmosphere. No music, nothing. But within a year all he was doing was copying us.

We like to think that we put on a decent show for the genuine punters, not just the hoorays, most of whom can’t tell a meat hook from a left hook and are really only there for a noisy night out.

The bottom line is that this is all about boxing. People come to see two guys fight, not to see gimmicks from Barry or Eddie Hearn – or me. They want to see the development of young talent, which is precisely what we are doing: just look at the undercard on our latest world championship bill – some truly exciting young stars including Jack Catterall and Liam Williams and great performances from Paul Butler, Vijender Singh and Tommy Langford.

Doing things the traditional way underpins our shows and this is appreciated not only by the fighters, but those around them, the managers, trainers and all the people bought up on that much-abused quality, tradition.

People pay to watch good fights, not froth and gloss. Eddie Hearn gave an interview last week in which he sneered at two people at the O2 ringside, Charlie Giles, the Boxing Board’s president and former chairman, and the veteran award-winning boxing journalist Colin Hart, because they pulled a face when a rapper preceded the Anthony Joshua fight. He intimated he didn’t really want to see those sort of people at ringside, as it is all about the youngsters and what they want. He didn’t actually use the phrase old farts, but that clearly was what he meant.

Of course boxing needs a young audience, it thrives on it, but it also needs the more mature generation, who actually have more spending power, and are also more knowledgeable and appreciative.

I thought his attitude was stupid and disrespectful. What what we want is a sport for everyone.

As I said, both Billy Joe and Liam Smith started their careers with me and our third world champion, Terry Flanagan, also has been weaned on boxing the traditional way, coming through the small halls. Their fans are genuine and not the latching-on-come-latelys. 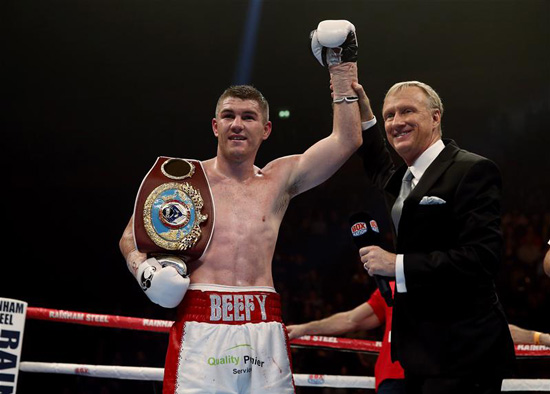 You have to show patience in this business; some fighters can be lured away thinking the grass is greener elsewhere, but what actually makes that grass greener is bullshit.

And this thing that you’ve got to be on a Matchroom show to get PPV and to be a star is nonsense, but that is what is peddled.

Believe me, pay-per-view is not the only way to do things and, much as I like him, the boxing world doesn’t revolved around Anthony Joshua, or indeed the heavyweight division, even though some sports editors seem to think so.

Heavyweights always seem to be the main thrust of promoting in boxing, but I have built lots of stars in other divisions.

The most dominant British heavyweight boxer of the last 20 years has been Lennox Lewis, but I never promoted him. It is all about developing competitive fights throughout the weight divisions and some really big stars have emerged from our roll of world champions – Naseem Hamed, Ricky Hatton and Joe Calzaghe to name but a few.

Now, for Billy Joe, the latest to be elevated to the galaxy, as the great Arthur Daley used to say, the world is his lobster.

We’ve had offers from all over for his first defence with some names including Alvarez, Golovkin, Jacobs, Eubank in the frame its a virtual pick-and-mix situation.

He and Liam Smith might even start a fight between them as to who should get into the ring first with Miguel Cotto. Who knows they may even have a catch-weight fight?! But for now they can sit back and enjoy their Christmas 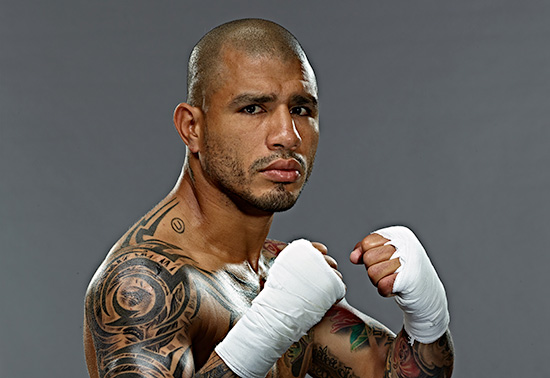 I’d also like to pay tribute to Andy Lee. He is one of the classiest guys I have ever encountered in boxing and I have no doubt that he will come again. He was obviously bitterly disappointed in losing his title and could have sneaked off in a huff, but although he was clearly exhausted and wanted to go home, he insisted on coming to the media conference afterwards just to congratulate Billy Joe and say well done. That shows real style.

The one big disappointment of the night was Mitchell Smith, who lost his WBO Inter-Continental title to George Jupp, he was arrogant in the build-up. Sometimes mistakes happen when a boxer loses an undefeated record – as say, Olympic champion Luke Campbell did, perhaps through being over-matched. But Smith’s was a self-inflicted wound. The way he behaved, and lack of preparation was unforgivable.

He’s a cocky kid and while sometimes that may not be a bad thing this time he thought he was going to walk in and knock over George Jupp, a capable and well-schooled opponent, without putting a hundred per cent into preparing for.

He let us down, he let his family down, he let himself down and he let the Boxing Writers’ Club down after they had voted him the Best Young Boxer of the Year.

He’s had the mightiest of bollockings from me and those around him. At least he has recognised this and is very contrite, as he should be and has apologised to his fans.

He’d better make sure he gets his act together as we’ll make a rematch with Jupp next year – and then we’ll see what he’s got.

Smith must take a leaf out of the manuals of our three musketeers – Saunders, Flanagan and namesake Liam if he wants to become a world champion by doing things the best way, which is the traditional way. Because there’s no other way.