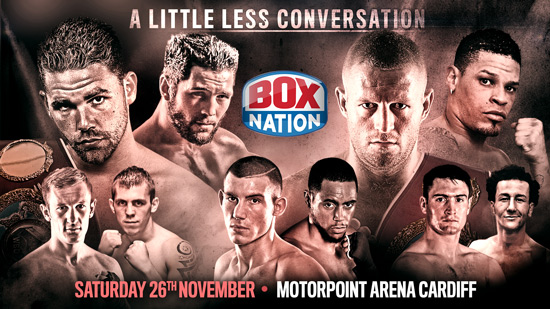 With a bumper year of boxing ahead, the stakes are very high for a number of our fighters set to be showcased on the ‘A Little Less Conversation‘ card at the Cardiff Motorpoint Arena on November 26.

In particular, perhaps, for our two world champions putting their belts on the line in the Welsh capital.

Billy Joe Saunders, for one, needs to get cracking. He makes his first defence of his WBO middleweight world title he won in style against Andy Lee in December of last year in Manchester.

It is not by design that he has remained inactive for so long. We did have a defence booked for the end of April at the Copper Box, but a hand injury put paid to that, as well as the planned prospect of a summer blockbuster.

Thankfully, those showdown fights against the pound-for-pound kings in and around his division remain there for him, which is why it is so vitally important that he combats the threat of the tough Russian Artur Akavov.

He cannot afford, under any circumstances, to slip up. He has got ring rust to dust off and he has got to make sure he is up for it because I know this fella is training very hard.

This is definitely no foregone conclusion; I can assure you of that.

The fight against Akavov – who is no mug, believe me – needs to prove a catalyst for Bill to become a busy and active champion.

A fit and motivated Billy Joe Saunders is as good, if not better, than anyone out there and if someone is going to overcome the likes of Gennady Golovkin or Canelo Alvarez, I believe it will be Bill.

If he can get back his rhythm against Akavov and do the job we know he can, Bill will soon be preparing to mix in elite company and needs to keep his eyes firmly on the prize by remaining in the gym and keeping himself in tip-top condition.

This isn’t a mantra he has always adhered to, but doing so is certainly in his best interests as there is a big 2017 ahead where Bill can prove what we have long believed – that he has got what it takes to reach the very top of his profession.

Terry Flanagan is pretty much in the same boat and needs to negotiate the threat of a tricky opponent in Orlando Cruz.

We did explore trying to get the Jorge Linares fight for him because it makes so much sense to determine who the No.1 lightweight really is.

Linares beat Anthony Crolla fairly comprehensively and it wasn’t really such a close fight that it called for a rematch, but that is what they have gone with in March.

This won’t affect Terry’s own ambitions and we are weighing up his options.

There is a tasty mandatory awaiting against the unbeaten Puerto Rican Felix Verdejo once he is back in action after a motorcycle accident, or we could seek a unification.

So Turbo is the one who needs to be in control against Cruz to give himself the perfect platform to set about dominating the division next year.

We have booked in some pre-Christmas action for two of our stable in front of the BoxNation cameras on December 3. 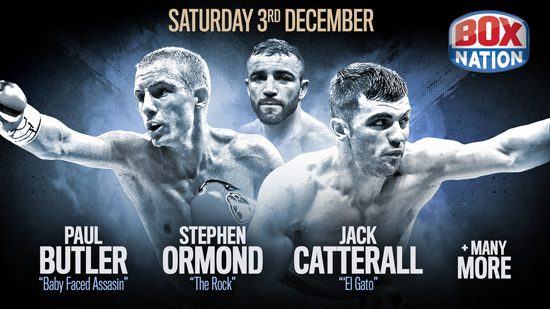 Paul Butler and Jack Catterall have been added to the December 3 bill in Paisley and, for both of them, it is about further bedding in with new trainers.

Butler was simply brilliant in his first outing with Joe Gallagher in Bolton last month, defeating the dangerous Alexis Ruiz by a landslide points margin.

He is back at bantamweight – where he won a world title back in 2014 – and it is important for him to create some momentum. As a former world champion with proven credentials there is no point messing around, he needs to be in there and ready for another world title shot next year.

Jack needs to get back on track after making the decision to change trainer following his last fight.

Due to the upheaval we elected to put on hold his challenge for the British title held by Tyrone Nurse.

Jack wants to get a fight in the bag in tandem with his new trainer Haroon Headley before reigniting his British title ambitions in the New Year.