CHARMER YARDE CAN BE THE BEST SINCE CONTEH 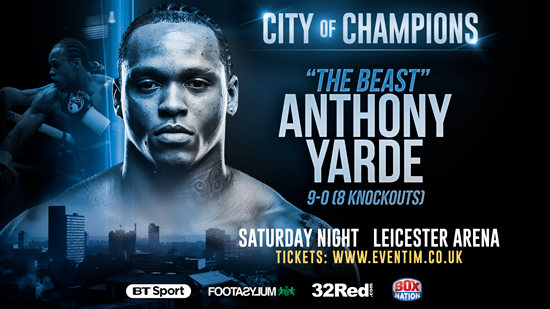 Our very own heavy mob will be looking to put on a show and will no doubt be using their customary strong-arm tactics when they return to the ring at the Leicester Arena on Saturday.

Light heavy Anthony Yarde is someone I have long tipped to make a huge impact in the sport and I am looking forward to seeing him back in action as he looks to extend his unbeaten record into double figures.

Anthony has got a bit of everything. He is athletic, powerful, a skilled technician and, obviously, carries force in both fists. He is also a bit of a charmer, a smooth operator whose appeal will extend beyond the sport of boxing.

Anthony has got to get the job done on Saturday because the prize on offer for him is a slot on our massive Copper Box show on Mau 20, with a shot at the Southern Area title held by Chris Hobbs.

I believe he is ready to get in and amongst the title mix and, as far as I’m concerned, the Southern Area is just for starters.

If he continues to do things the right way and carries on fine-tuning his skills in the gym then he can go all the way and become the finest at his weight in the country since John Conteh.

Daniel Dubois made quick work of his debut assignment with a 35-second demolition of an admittedly over-matched opponent.

It wasn’t the plan for Daniel to face late-sub Marcus Kelly, but he did what he had to do and, because he didn’t have to over-extend himself, we are delighted to be able to add him to this already stacked Leicester card.

This time around he will again be facing an opponent with a winning record, but we expect Blaise Mendouo to present a far sterner examination of his credentials.

Mendouo represented Cameroon at the London 2012 Olympics and his backside has yet to encounter the canvas in his 18 rounds of professional experience so far.

Now based in Manchester, Mendouo was one of seven Cameroon athletes – including five boxers – who absconded from the Olympic village after competing in 2012. Thomas Essomba, the recent Commonwealth title opponent of our flyweight Jay Harris, was another who remained in the UK following the Games.
​
Mendouo, who won bronze at the 2010 Commonwealth Games in Delhi, will see this as a big opportunity for himself and will be coming to win, which makes this an ideal test for Daniel at this stage of his career.

Daniel is going to make a big noise in the heavyweight division and his journey to the top is going to be well worth keeping tabs on because it will be an explosive and entertaining ride.

In an interview last weekend, I am told that Eddie Hearn finally raised the possibility of a Manchester derby dust-up between Terry Flanagan and Anthony Crolla, saying he had ‘reached out’ to us over the match-up.

Better late than never, I suppose.

It is a fight we were very keen on putting together while Crolla was in possession of a world title belt, but our interest was never reciprocated.

This was a great pity because it was a fight that would have been massive in Manchester and beyond.

We are not against the idea of the city rivals getting it on, but it is Terry who is in the driving seat now as an unbeaten world champion and he wants a unification fight.

The issue for Crolla at the moment is that he would need to get a win under his belt because the WBO wouldn’t entertain a challenger for their title coming in off the back of two straight defeats.

The ‘City of Champions’  Leicester show will be  screened live on BoxNation and BT. Remaining tickets priced £30 are available from www.ticketmaster.co.uk