It is just a few weeks now until the biggie we have all been waiting for – and probably the biggest to take place within our shores for many years. 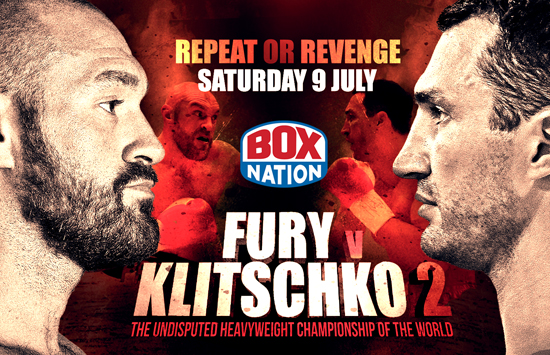 Tyson Fury puts his unified heavyweight champion status – minus the IBF belt that was snatched back by the governing body with indecent haste – back on the line in a return match with former holder Wladimir Klitschko.

It is a genuine contest for the right to be called heavyweight champion of the world between the two top heavies on the planet.

Back in November in Dusseldorf, Tyson stuck to his lines rehearsed from the supremely crafted script devised by his uncle and trainer Peter. It resulted in him completely flummoxing a champion of nigh on ten years standing, almost paralysing his ability to throw shots.

Maybe Tyson also got into his head with his pre-fight shenanigans and I wouldn’t be surprised if Dr Steelhammer employs a shrink this time around to avoid a repeat of that. The build-up has been fascinating again and it was clear from the recently aired head-to-head on BoxNation that Wladimir simply can’t fathom Tyson out.

His stock response is that he is going to throw more shots this time but, by doing that will he will just play into the speedy and clever hands of his wily opponent?

Tyson is a smart operator and used the fight announcement press conference to taunt Wladimir over being beaten by a man carrying excess baggage around the waist. It was a good line at the time and provided a photo opportunity that was lapped up by the national press, but don’t be fooled. Tyson looks in tremendous nick, better than ever, plus there are few better than trainer Peter when it comes to knocking heavyweights into shape.

The first fight was cagey and no-one is claiming it was a classic. The sequel, I strongly suspect, could well be explosive, especially if Wladimir keeps to his word and engages. He has to.

This is one reason why we pulled out all the stops to bring this fight to BoxNation subscribers and we are delighted to be working again with Team Fury.

Peter Fury said the following about our link-up in a recent interview from their training camp in Rotterdam and I can only appreciate and echo his sentiments.

“I am happy to be doing business with them and, the thing is, I really want BoxNation to do well. Regardless of what people think, I’ve got a unified heavyweight champion of the world, who is not going to be beat for a long time. So he will flagship BoxNation and it is not just about the money either, it is about doing well for everybody around us.

“BoxNation has pulled up where others couldn’t, they have put their money where their mouth is, when it was needed. Let’s not forget, first time around they got Tyson to a mandatory position and now we are back and everyone has sorted out what we are doing. It is all happy days going forward.

“I want us all to go forward as a team, with Mick Hennessy, Frank Warren, Bill Ives and BoxNation. We want a long-term relationship as a proper unit. That is what we do, we sit down and discuss things as a team and I am very happy because I have got probably one of the strongest teams in the world at the back of me. I am very happy with it.”

Hear, hear, Peter – and we are more than happy to have both Tyson and Hughie as flagship fighters for the Channel of Champions.

So it should be quite a night for British boxing at the Manchester Arena on July 9, headlined by a truly compelling contest. Anthony Joshua defends his IBF portion of the heavyweight pickings two weeks earlier against Dominic Breazeale but, let’s be honest, we hardly need the second coming of Paul the Octopus to figure out how that one will go.

Tyson has got it all to do again and has a difficult job on his hands. I am confident he will rise to this special occasion before moving on to bigger and better things.