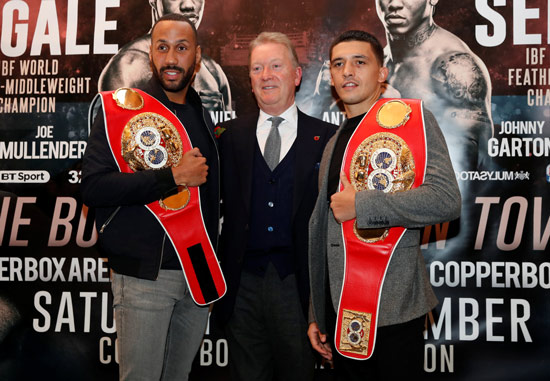 I WAS DELIGHTED to formally present James DeGale and Lee Selby to the media, in London this week with the prestigious pair both topping our fight roster for December 9 at the Copper Box in Stratford.

For me, it is simply a continuation of what we are successfully striving to deliver – the best fights and fighters for the boxing public.

They will be making voluntary defences of their IBF world titles on our show – that also includes the bludgeoning punch power of Anthony Yarde and Daniel Dubois – but this is also about looking at the longer-term.

Mapping out potential marquee fights for a little further down the line.

It is a case of investing in fighters for the benefit of them and fans. It will be a top quality card and, for me, it is important to deliver another show before the end of the year with meaningful fighters.

Providing he comes through without any mishaps on December 9, Lee defending his world title against Josh Warrington will happen next year. With Carl Frampton also in the mix, what we are working on is an exciting prospect for the fans.

James needs to be back after being on the road in some tough fights over the last couple of years. They were tests where he showed his heart and character to come through and now is the time for him to be back where he belongs.

What I am interested in is delivering for my punters and that is what it is all about for me.

Unlike some, we will keep putting our money up. Others are simply in it for their own ends – I am in it for boxing and building fighters. You can’t tell me that the addition of someone like James to the glut of pay-per-view cards we are continually forking out for wouldn’t enhance them greatly and give some much needed value to the fans.

I am more than happy to have both James and Lee on our show. It has been a long, long haul getting to where we are now, but it is and always will be a building process over the longer term.

Anthony Yarde will be seeking to do what nobody has managed before when he takes to the ring at the Copper Box against Nikola Sjekloca. The Montenegro-based veteran of 37 fights – with just four defeats – is an ideal test for Anthony at this stage of his development.

Our light heavyweight sensation needs rounds under his belt and Sjekloca could well be just the man to take him into deeper waters.

Sjekloca has kept good company in his career, going in with the likes of Callum Smith, Sakio Bika, Tyrone Zeuge and, in his last fight, Robert Stieglitz. On no occasion has he failed to hear the final bell and, against Stieglitz, the decision was a split draw with the European title at stake.

So this will be an ideal examination of Anthony’s credentials, one where he might just have to take his time and go to the scorecards. On the other hand, if he puts Sjekloca away, it will represent a huge statement.

Another one to keep an eye out for on the night is obviously Daniel Dubois, who I believe is already the hardest punching heavyweight in the business.

We mustn’t get carried away though and always keep in mind that he remains a five-fight novice who is still learning the ropes.

His brutal execution of AJ Carter last time out will have put many domestic opponents off sharing a ring with him, but the Welshman Dorian Darch had no hesitation in signing up for it. Darch has been around the block a bit and has been in with most of the current domestic heavies – such as Hughie Fury, Anthony Joshua and Ian Lewison – so he will be a good test for Daniel at this point in time.

Bigger tests lie ahead next year for the 20-year-old and I have absolutely no doubt he will pass them all with flying colours because this kid has got what it takes to reach the very top of the game.