CORCORAN: “GIVING AWAY SO MUCH WEIGHT WAS DEFINITELY MADNESS” 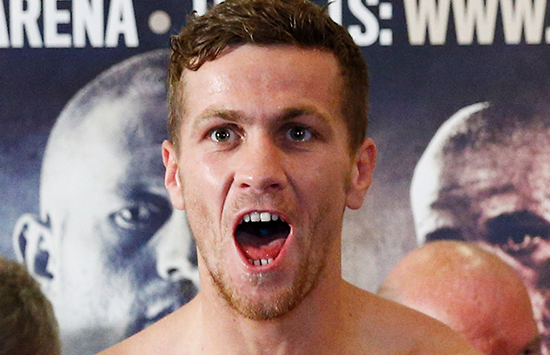 Despite harbouring a bit of an obsession over settling a score with his single conqueror to date, logic has finally prevailed for Gary Corcoran and, for now at least, he has turned his attention to climbing the welterweight ladder.

After testing out his new weight discipline with a routine tune-up against James Gorman in Ireland in March – where he weighed in under the limit at a tad over 145lbs – The Hellraiser is now after titles and has accepted a tall order in the shape of Larry Ekundayo, who he fights for the vacant WBO Intercontinental title at the Copper Box on Saturday evening.

The 26-year-old acknowledges that at super welter, he was simply punching well above his weight.

Corcoran was bucking the modern trend where boxers train down to well below their natural poundage for a day before weigh in before piling the pounds back on and entering the ring often more than a stone over the prescribed limit.

Corcoran, whose natural weight, was pretty much his fighting weight, often found himself at a significant disadvantage under the lights and it was particularly noticeable against Liam Williams in his British title challenge last July.

The saying goes, if you can’t beat them, join them and the penny – as well as at least seven pounds – has now dropped for the Wembley man.

“I was punching above my weight and was going in weighing 11st 4lbs, which is ridiculous when I look back,” he conceded. “I was weighing 10st 10lbs the day before and in the morning – the same when I was fighting Danny Butler.

“I know I was probably the only one doing it, but I am one these fellas who was too headstrong to listen to anyone.

“I was just too cosy, I could have cut it down, but I liked to eat well the night before a fight and liked having my four meals a day. Maybe if I had cut the weight before it could have made me better by coming down a weight.

“Giving away so much weight in the ring is definitely madness and it is dangerous to fight someone so much heavier than me on the night, but I have learned from it.”

Given the fact that he came in at two pounds under the welterweight limit in March, a shift even further south could even be an option.

“I made that easy the day before, even with having a meal before I went to bed and drinking all my water. I had a coffee before I weighed in and still came in at 10st 5 1/2lbs. It was so easy and if I tried my best I could probably do light welterweight.

“It was natural coming down a weight and, if I do it correctly, I think I will be even stronger and better for it.

“I think I could start seeing people off, but mostly I will be a better fighter. I will be bigger and stronger at the weight and a bit more natural.”