CORCORAN PLANNING TO BE DOUBLE TROUBLE 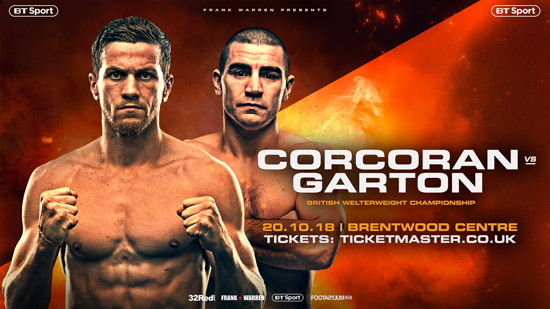 GARY CORCORAN is planning to wreck gym-mates Johnny Garton and Bradley Skeete inside the next few months.

The former world title challenger attempts the first leg of the double when he challenges Garton for the vacant British welterweight title at the Brentwood Centre on Saturday October 20th.

Corcoran (18-2) is annoyed that Skeete gave up the title and swerved him, adding: “There must be some reason why Bradley doesn’t want to fight me, but after Johnny I say, ‘Bring on Bradley’.

“I have chased Bradley for a long time and it has never happened, and if it doesn’t take place early next year we will never fight.

“I will not be overlooking Johnny who has done so well in his career, but his ambition is to be British champion. Mine is to be a world champion.

“We all know that Johnny is a come forward fighter, but if he tries boxing me I will box his head off. Whatever happens, I will hunt him down and beat him up.

“I am going to be too big and strong for Johnny. I am a level above Johnny and I will show it on the night.”

Corcoran, 27, is desperate to leave domestic level behind him once again and get back among the welterweight division’s elite.

His defeats came on points against Liam Williams more than two years and in a WBO world title challenge against Jeff Horn in Brisbane last December when he was stopped in 11 rounds.

Sandwiched between those setback was a win over highly ranked Nigerian Larry Ekundayo.

He added: “I know that on my day I can mix it with the best welterweights and apart from maybe Bradley, I am levels above most of these kids in Britain.

“I have lost to world class fighters. Johnny hasn’t fought anybody like that.

“Bradley fought one world class opponent, Kerman Lejarraga and got stopped in two rounds. I’ve boxed and beaten someone at a higher level than Bradley in Ekundayo.