CORCORAN SET TO FEAST ON A HORNET 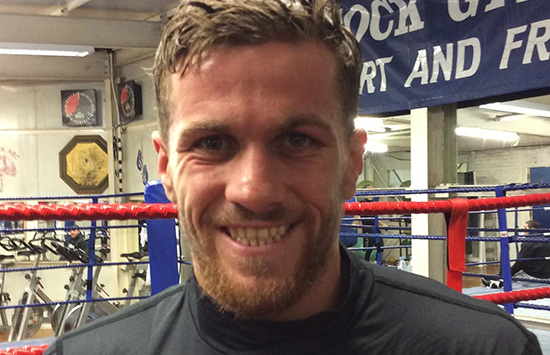 AMIR KHAN ISN’T the only British welterweight heading to Australia to go rough Down Under this winter.

So what with Amir swapping a 2017 return to the ring for a stint in the ‘jungle’ with Ant & Dec on ‘I’m a celebrity, get me out of here’, the venture to the Southern Hemisphere of Gary Corcoran also came somewhat out of the blue.

The Wembley welter, who claimed the vacant WBO Intercontinental title last time out against Larry Ekundayo, has been handed the Golden Ticket to fight the full champion Jeff Horn in his first defence in Brisbane on December 13.

The 27-year-old ‘Hellraiser’ was carrying out domestic duties when he took the call that would change the course of his career.

His wife Jennifer was dragging her reluctant husband around Brent Cross shopping centre when the tedium was interrupted by the sound of his mobile phone and news that send his head into a spin.

One thing with Gary is – as Frank Warren will confirm – he doesn’t require any thinking time when it comes to being offered a fight.

“I was out shopping with the missus and I got a phone call asking if I would like to fight Jeff Horn,” he recalled this week ahead of setting off to a temporary base in Melbourne on Monday to get acclimatised. “I was like ‘Jeff Horn? Yeah of course I’ll fight him!’.

“I was then just walking around and my head was spinning. I checked it was for the world title and, it is funny, I had been saying for weeks that this guy is so beatable.”

Unlike some voluntary defences, where the opponent drafted in is often on a hiding to nothing, Gary – along with many knowledgeable observers – believe that Horn might be unknowingly biting off more than he can chew.

Even if he does have the name of Manny Pacquiao on his resume.

“He is very beatable, I don’t want to sound too confident, but I know I have the beating of this kid all day long.

“Pacquiao, let’s be honest, he never trained for that fight. Maybe he was too much into politics and he looked past it.

“He got that win and fair play to him, now he has a world title and is the best thing since sliced bread over there. I am going to beat him up when I fight him.”

So while Amir might – or might not – get a bit squeamish and yell ‘I’m a celebrity, get me out of here’ after being confronted with a feast of mealworms and the like, Gary will have absolutely no qualms over munching on a Hornet.

More from Gary on his Aussie adventure next week

CARL FRAMPTON IS happy to be keeping good company now he is one of the elite squad members of Frank Warren’s burgeoning crop of top fighters.

Potential big fights on the home front should come thick and fast in the featherweight division, what with Josh Warrington and now Lee Selby operating under the same promotional banner.

Happily, for both fighters and fight fans, all three of them are not messing about and are more than ready to get it on.

“That is the name of the game,” insisted Carl, who takes on Horacio Garcia in Belfast this weekend. “You want to fight the best, but you need to be rewarded for it and I think with the backing of Frank and BT Sport, people will be willing to put it on the line against top opposition.

“What was kind of holding people back before was they were looking at it thinking ‘this is a risk, I am fighting a good opponent and maybe the money isn’t so great’.

“So with the backing of BT and Frank, the big boys will fight each other.”

With Selby and Warrington mandated to meet for the Welshman’s IBF world title next year, Carl would have no objections in trying to bring his own belt to the party by taking on one of the other champions in the meantime.

“Why not, we’ll see what happens and I’ll take it one fight at a time. I’m happy to fight anybody, whatever makes sense, as long as I can get to Windsor Park next summer.

“I do want to be kept busy and I would like to get a fight in April – and I don’t mind travelling either. It is great to be back at home, but I wouldn’t turn my nose up at Vegas.”

Meanwhile, Carl predicts that any newcomers to boxing in Belfast will be overwhelmed by the atmosphere generated within the SSE Arena on Saturday, which you can watch live on BT Sport and BoxNation.

“I promise you that, from a 9,000 crowd, it is going to be one of the best atmospheres, if not the best, you have ever been a part of. It is incredible and they always lift the roof off the place and are so passionate.

“The capacity is not huge in relation to some venues, but I am telling you the noise from these people in Belfast will make the hairs stand up on the back your neck.”

Coverage from Belfast on Saturday begins on BoxNation at 7.25pm and on BT Sport at 8.30pm