Stand by your sets for a sure-fire epic this weekend that may well go down in the annals of boxing as one of the great fights in recent years. 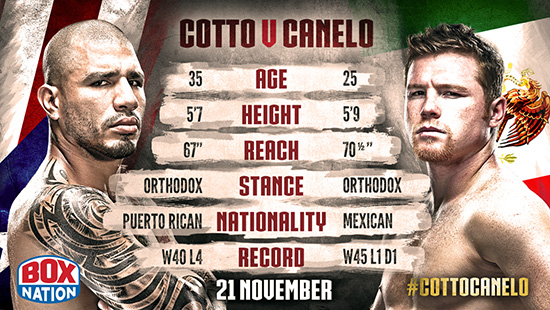 When Miguel Cotto and Saul ’Canelo’ Alvarez clash at the Mandalay Bay in Las Vegas it will be night of Latino pride and passion, a fiery scrap for the connoisseur as well as the casual fan and one no BoxNation subscriber will want to miss.

We’ve had some crackers this year featuring the great Gennady Golovkin, Timothy Bradley, Terence Crawford plus Andy Lee and Peter Quillin and the emergence of two fresh and exciting home-brewed world kingpins in Terry Flanagan and Liam Smith, all live and exclusive on the Channel of Champions. Now comes a really classic matchup.

Warrior is a word that could have been invented for Cotto.

One of boxing’s elder statesman – one bordering on having the label ‘legend’ affixed to his name  – the four-weight world champion has revived a once-flagging career and has never looked in better nick. Back in 2012, following consecutive losses to Floyd Mayweather Jnr and Austin Trout at 154 pounds, the US-born Puerto Rican was considered by many to be a back number.

Sensibly he turned to Hall of fame trainer Freddie Roach and the Wild Card gym to restore his apparently drained desire.

Although the WBC withdrew their recognition of Cotto as middleweight  champion this week, widely believed to be because he declined to pay their $300,000 (£200,000) sanction fee – while saying Alvarez will be named champion if he wins – this is not a contest that demands a title tag be a classic.

The now ex-WBC champion stopped another former world champion Daniel Geale in four rounds in June to set up the fight with the famously fiery red-topped Mexican who was equally impressive in his last contest, spectacularly halting James Kirkland inside three rounds in May. This created one of the natural ‘mega-fights’ the sport craves.

Both fought and lost to on points to Mayweather, with Alvarez even extracting a drawn card from one of the ringside judges, though I thought  Mayweather clearly won.

Mayweather said that Cotto was ‘the toughest guy I’ve ever faced” and the one certainty is that Puerto Rican will fight with all the intensity he can muster against an opponent who is bigger and arguably stronger though Cotto is likely to be more comfortable at the catchweight of 155lbs.

Despite 25-year-old former super-welterweight champion Alvarez actually having had more fights (47 to the decade older Cotto’s 44) in a five-years shorter career, Cotto has the edge in experience having a greater number of ‘name’ opponents on his ring dance card.

As the fight will take place below the middleweight limit this might suit Cotto better as the smaller man. The Mexican will need to make the greater adjustment in training but should he get it right his ingrained aggressiveness could dominate in a contest that will be determined as much by physicality as technical expertise.

When allied with the youth of Alvarez, this may prove too much even for boxing’s eternal warrior in an mesmerising collision of skill and will that could be both brutal and bloody.

I must say I fancy Alvarez to win, possibly inside the distance after a really tremendous fight, but renaissance man Cotto has defied the odds before so it would be ridiculous to write him off.

Waiting in the ring wings

Once the dust has settled on Saturday night – of course that is the early hours of Sunday morning here – you can be certain the talk will be who is going to fight who next?

There are several possible permutations, with Golovkin ready, willing and eminently able to take on the winner – if either Cotto or Alvarez fancy it. It is a fight that makes a lot of sense but, equally, I know that, despite denials, the Lee camp has been in touch with both Cotto’s and Golovkin’s teams on the assumption that Andy Lee will retain his WBO title against Billy Joe Saunders on December 19. 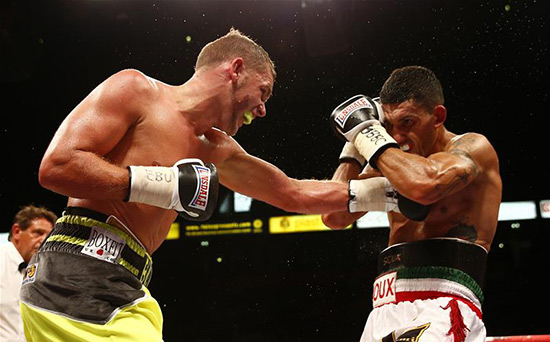 That’s presumptuous to say the least for the more I hear about Billy Joe now he’s back training at full-pelt, the more I am convinced he will win in what certainly won’t be an easy job. But B-J is one of the most resolute characters I have ever encountered in boxing.

He’s looking leaner, meaner and keener than ever. There is absolutely no doubt in his mind that he will become champion – and I go along with that.

I’d be happy for him to fight either Cotto or Alvarez but, as I’ve said before, I’d much prefer for him to gain more experience before even thinking about Golovkin. But that would be a huge-money fight and, if an offer came along, it may be hard to resist.

I like Oscar De La Hoya but I think he’s been a bit disingenuous in slagging off Floyd Mayweather as he did in that open letter in Playboy magazine,  saying ‘good riddance’ to one of the most boring men in boxing’ and that “the fight game will be a better one without you in it.”

Well, For my part I think Mayweather has been good for boxing bringing in more money and certainly more pay-per-view figures than the sport has ever known. I think many people base their views of him on his fight against Manny Pacquiao, which of course wasn’t exactly thrill-a-minute. That was as much to do with styles as anything.

Oscar seems to have gone well over the top, though I doubt it will bother Mayweather one iota.

We are featuring two charity shows this weekend – one for DEBRA tonight and another on Monday in aid of Nordoff Robbins both at London’s Hilton Hotel, Park Lane.

This year the annual DEBRA show, which supports the-non-government funded for those affected by the terrible genetic skin blistering condition Epidermolysis Bullosa (EB) has a change of pace as it will feature Total Combat, the new sport which is a sort of Twenty20 version of boxing that has had several successful trial runs and will be promoted regularly by my son Francis, who devised it, from early next year.

The Monday event sees Bradley Skeete defending his WBO European welterweight title on a show for Nordoff Robbins, a wonderful charity devoted to helping both kids and adults with a range of disabilities through music. 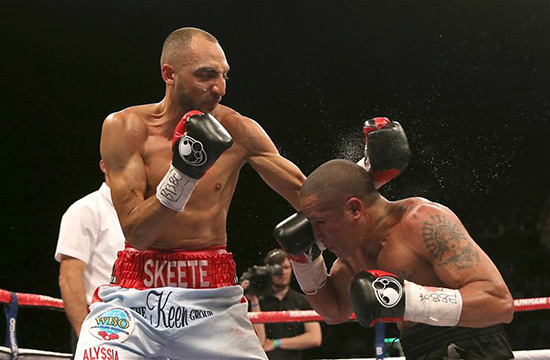 I’ve got a lot of time for Bradley. He hails from Penge which, as I’ve said before, is not exactly a hotbed of boxing, but he is one of the most popular rising stars on the British scene.

Next year could really be a brilliant one for him. What I like about him is that he listens to advice.

He got criticism earlier this year, but he’s livened up his act. He has great skills but, to be honest, he looked a bit boring – he’s certainly not the most elegant of fighters with his skinny, gangly  frame, but then he actually went out there and started knocking a few opponents over. He’s shown that he can punch as well as box, mixing it when he needs to and next year I expect to see him stepping up in class fighting for top honours.

Tomorrow: Hubbard’s Cupboard asks when will a boxer next win the BBC Sports Personality award.