Cracker on the cards for young ace Jack

After exclusively capturing the stunning drama in Las Vegas at the weekend BoxNation returns to the domestic beat tonight when our cameras are at the home of Bolton Wanderers for a show headlined for the first time by young Jack Catterall.

I have always believed Catterall has the potential to go all the way to the very top. He wasn’t a decorated amateur, but he has taken to the pro game like a duck to water – and is not afraid of operating at the deep end.

In just his sixth fight, he took on and beat the extrovert Renald ‘The Lion’ Garrido who, in September, returned to these shores and put a dent in the unbeaten record of Bradley Saunders. Two fights later, he was in title territory and demolished Liverpool’s highly-rated 11-0 prospect Nathan Brough on his home patch – claiming the Central Area belt in the process.

Probably the fight that really made people sit up and take notice was when he was matched with former GB amateur skipper Tom Stalker for the vacant WBO European title in his next assignment. Stalker, who was 9-0 himself at the time, was down twice in the first two rounds and finally succumbed to the clout of Catterall in the eighth.

Now just 22, Catterall went on to claim the WBO Intercontinental title and has defended it three times against tough international opposition. He wants, however, to take a traditional route to the top so, at the Macron Stadium, he takes on Joe Hughes in a final eliminator for the British super lightweight championship.

It is a fight that has stirred up considerable interest, not least with it taking place not much more than a big goal kick away from his home in Chorley. Jack’s immediate aim is to challenge for the British title currently held by Tyrone Nurse and it is one he is confident of meeting.

Hughes, though, could well prove to be an awkward customer and he put an end to three unbeaten records in his last five fights – last time out defeating the highly-rated Ricky Hatton prospect, Anthony Upton. He also claims to have a knack for successfully unpicking southpaws. 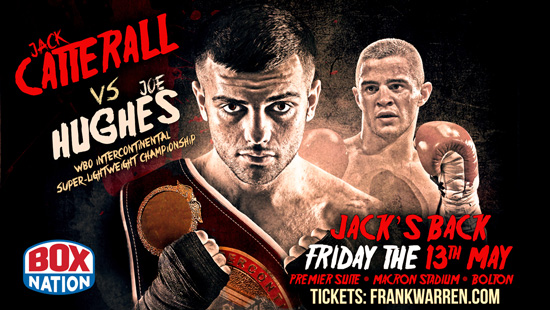 Even though Jack will have his work cut out tonight, I am confident he will continue to fulfil his great promise and be another force to be reckoned with from the North West region. There is a boxing boom in the region with an incredible wealth of talent and I believe Jack will soon be punching his weight up there alongside the likes of established champions Terry Flanagan, Liam Smith and Anthony Crolla , and following in the fighting footsteps of Ricky Hatton.

UP A COUPLE of divisions, the super welterweight scene in this country promises to provide some fascinating domestic match-ups over the next 12 months.

Bolton will witness the return to the picture of Jimmy Kelly jnr after he fell slightly short in his brave step up to challenge Liam Smith for the world title. He is certainly now in good company as he seeks to break back into contention.

Ahmet Patterson has been mandated to challenge for the British title against big-punching champion Liam Williams in a fight we are looking to make later this year, while the unbeaten Gary Corcoran – who literally takes on all comers – can consider himself unlucky to be overlooked for the mandatory spot.

A win for Kelly tonight, under the guidance of new trainer Lee Beard, puts him right in that mix, with the fearsome foursome all jostling for position, not only for British honours, but to earn a shot a shot at world champion Smith.

Also on the undercard we have Accrington super middleweight Luke Blackledge looking to further enhance his growing reputation in the division when he defends his Commonwealth title against the Ghanaian Ishmael Tetteh.

BoxNation is on air from Bolton from 6.30pm.

BOXNATION HAS FURTHER bolstered its summer schedule with the securing of the unification clash between Terence Crawford and Viktor Postol for the WBO and WBC super lightweight titles. 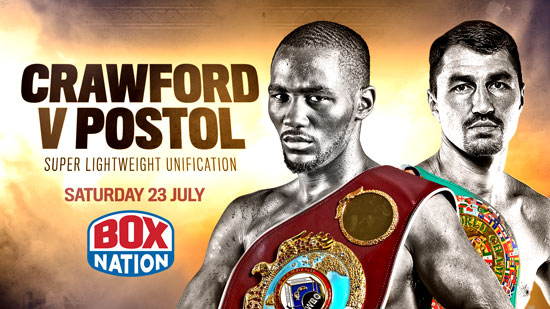 It promises to be another corker in what should be a month to remember for the Channel of Champions, with Tyson Fury and Wladimir Klitschko already booked in for the ‘Repeat or Revenge’ show in Manchester on July 9.

Crawford v Postol on the 23rd has all the ingredients, with both fighters possessing perfect 28-0 records, but I have believed all along that Crawford will take some stopping and headlining his first show at the MGM Grand in Las Vegas is just the start of bigger things to come.