Manchester’s WBA World Lightweight champion Anthony Crolla is excited at the prospect of facing the winner of Terry Flanagan and Derry Mathews in a massive all British unification showdown. 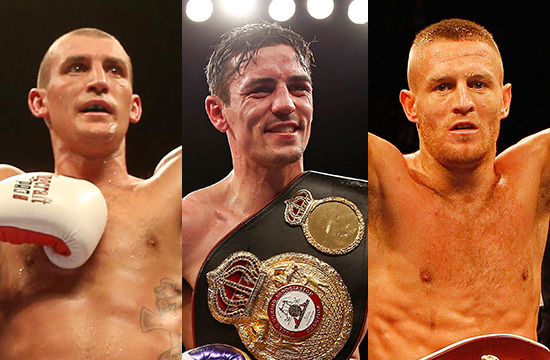 Promoter Frank Warren offered Crolla £500,000 to face the winner out of Flanagan, the reigning WBO king, and Mathews, who clash on Saturday 13th February at the Liverpool Echo Arena exclusively live on BoxNation, and the Mancunian says there’s a good chance of  the fight happening.

He said, “It’s a great offer but I can’t really consider it knowing that I’ve got a fight to come. Both teams can come to the table and talk after our next fights are behind us so there’s every chance of the fight happening.”

Crolla lost to Liverpool’s Mathews earlier in his career by a sixth round stoppage and then a year later they battled to a draw, but Crolla would be keen for revenge. However, ‘Million Dollar’, who attended the same school as Flanagan, can’t see past a win for his fellow Mancunian come fight night.

He said: “I fancy Terry to stop Derry between rounds six and eight. Derry is a brave fighter but I think Terry’s style is all wrong for him, he beat him up in Prize Fighter and he’s only got better since then so I don’t see it being different this time round.  If Derry is going to win he needs to catch Terry with a big punch early. He’s got to get Terry upset nice and early otherwise I can see Terry breaking him up bit by bit,”

“I think it’s a fantastic fight that’s been made between them. The Liverpool and Manchester rivalry adds a lot of spice to it, any rivalry between those two cities is massive and the world title being on the line makes it even bigger. I watched the press conference last week and you can see it’s heating up nicely, I know Terry pretty well and he’s not usually one to get caught up in all that so Derry’s obviously got under his skin.”

Crolla and Mathews fought out an absorbing draw when the pair met in a rematch back in 2013, that won the British Boxing Board of Control’s Fight of the Year award.  Mathews seemed to have the fight in the bag going into the final stages only to be caught out by Crolla’s strong finish. Crolla believes Flanagan’s youth will prevail and is unsure of how many big fights Derry has left in him.

“I know as well as most that Derry has certainly got a punchers chance, he has a good boxing brain as well but in my opinion Terry is definitely the strong favourite. Everyone can see that Terry is improving with every fight and he’ll take a lot of confidence from his win in Prize Fighter, it’ll give him a mental edge over Derry. He was a super-featherweight back then and won convincingly” said Crolla.

He continued: “They’ve faced each other in sparring as well and again from what I’ve heard Terry came out well on top. That was going back a few years and since then Terry’s grown into a strong lightweight. I’m sure Terry’s team have been studying Derry in great detail, they leave no stone unturned and they’ll be well prepared for this fight. I believe that they’ll have an answer for everything Derry brings.”