Swindon’s red-hot super-middleweight star Jamie Cox is gunning for the winner of Fedor Chudinov vs. Felix Sturm. The supremely confident WBO European Champion will be keeping a close eye on Saturday’s world title showdown, exclusively live on BoxNation, and says he’d have no problems disposing of either of them.

Since making the step up to super-middleweight the Swindon smasher has blown away Alastair Warren, Blas Miguel Martinez and Ferenc Alberts with impressive first round knockouts and has promised to floor Chudinov should the pair meet.

“If they make the fight with Chudinov and it happens in the UK he won’t want to come back ever again. I’ll knock him clean out; I’m too explosive for him and he doesn’t know how to go backwards. I’d happily take on either of them; they’d both get knocked out,” said Cox, who’s rated number four in the world by the WBO.

The unbeaten 29 year-old southpaw stunner is one of the most avoided fighters at 168 pounds in the country and is spreading fear throughout his new division. A brutal body-puncher blessed with a recently re-constructed wrecking ball backhand, Cox says he has the rest of his division running scared.

“I’ve been sparring with world champions in the past year and I know how I rated against them. I’m not one to talk about what I did to them but people were there and saw it with their own eyes. This year there’s going to be more knockouts and I’ll become a world champion.”

The former Commonwealth gold medallist has been marked as one of British boxing’s biggest talents and is enjoying life at his new weight.

He said: “I feel a lot healthier and more comfortable at this weight because I can eat what I want. I don’t have to worry about my diet as much so it gives me more time to concentrate on my boxing. I’ve more than proved I can hold my own at this weight but if I ever needed to I could easily make middleweight again.

Chudinov defeated Sturm on a split decision when the pair in May last year to claim the vacant WBA World Super-Middleweight title. Cox is expecting another gruelling fight and is predicting a similar outcome. 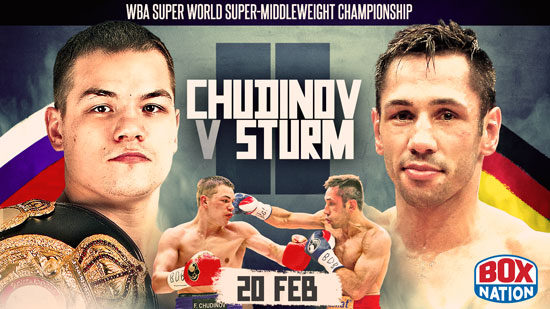 He said: “I can see it going the same way as their last fight. Chudinov can only get better with experience and I think Sturm is getting a little bit past his sell-by date so it’ll be a repeat of their last fight; Chudinov wins.”

Watch Chudinov v Sturm II exclusively live on BoxNation on Saturday night from 7pm.  To subscribe to BoxNation (Sky 437/490HD, Virgin 525, Freeview 255, TalkTalk 415, iPhone, iPad or Android and Amazon devices) for only £12 a month visit boxnation.com or to watch online subscribe at watch.boxnation.com