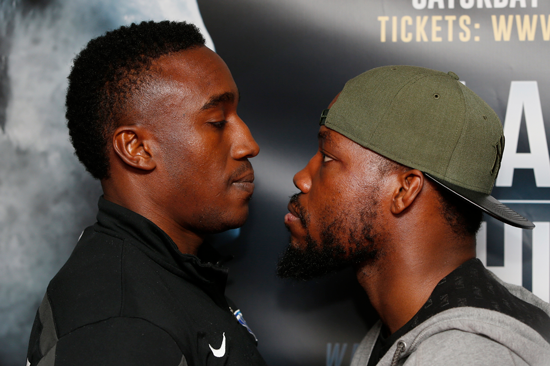 Darryll Williams claims he should never have defeated bitter rival Jahmaine Smyle in their first fight.

He beat the Leicester man on points in April to capture the English Super-Middleweight title and they clash again at London’s Copper Box Arena on July 8, live on BT Sport and BoxNation.

Despite serving up a Fight of the Year contender, Williams insists he shouldn’t have been in the ring that night let alone being victorious after ten action packed rounds,

Williams, 27, said: “I’m not taking anything away from Jahmaine, but to be honest the camp I had was probably the worst I’ve had as a boxer.

“I was feeling really rough the week of the fight, and sometimes I think, ’How did Jahmaine lose?’

“I am quiet surprised it went the way it did, but I’m a guy who cannot pull out. I would rather go out on my shield.

“I never told anyone, but I was in a terrible way before. I had an ear infection and I was in a bad, bad way.”

Unbeaten Williams insists that Smyle is in for an even tougher time next month, warning: “He hasn’t seen anything.

“If I did that in that condition he hasn’t got as clue what is coming to him in July.

“I don’t mind the immediate rematch because I won’t be ill like I was. Let’s see what he’s really made of.”

Williams who is in Manchester training under Ricky Hatton added: “Ricky is very in-depth with what he says and we’ve gelled.

“He is more technical than he looks. He and Blain Younis are very good on the pads.

“To me it doesn’t matter who I fight. I am just happy to go back in there again.”