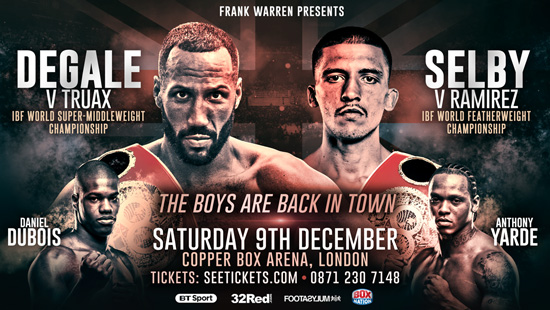 THE IBF SUPER-MIDDLEWEIGHT CHAMPIONSHIP OF THE WORLD
JAMES DEGALE MBE vs. CALEB TRUAX

On the same evening, Welshman Lee Selby will make the fourth defence of his IBF Featherweight World Championship against undefeated Mexican Eduardo Ramirez, both fights will be shown live on BT Sport and BoxNation.

‘Chunky’ has been out of the ring since January 2017, when his unification fight with WBC Super-Middleweight Champion Badou Jack ended in a majority draw. Jack was knocked down in the first round but ended strongly flooring the gutsy DeGale in the last round in New York.

DeGale underwent surgery on his right shoulder in June to repair a 180-degree tear, a rota-cuff tear and an ACJ stabilisation, an injury that had been troubling him for around two years, and is now fit and ready to defend his World Title on home soil for the first time.

‘Golden’ got his first shot at a World Title when he faced 160-pound Champion Jacobs in Chicago in April 2015. He gave Jacobs all he could handle before being stopped in the 12th round.

Since his loss to Direll in April 2016, Truax (28-3-2 18 KOs) has bounced back with consecutive KO wins and is determined to upset the odds when he fights in the UK for the first time next month.

Undefeated Selby knows that a win on December 9th will set-up a blockbuster showdown with long-term rival and mandatory challenger Josh Warrington in 2018. Since winning his IBF crown against Evgeny Gradovich in May 2015 he has made three successful defences and is aiming to steal the show next month.

Ramirez (20-0-3, 7 KOs) is a 24-year-old southpaw from Los Mochis, Sinola, Mexico with fast hands and a solid defence. He is managed and trained by Montiel Jr., brother of the five-time World Champion and former Selby challenger Fernando Montiel.

“Truax is a good solid fighter with a top pedigree,” said DeGale. “He’s been in with some quality opponents like Daniel Jacobs, Jermain Taylor and Andre Dirrell.

“He’ll be fighting away from home so he’s going to bring it on and try to take my World title, but I’m the best Super-Middleweight in the world and I’m going into the ring full of confidence and 100 percent fit.

“I’ve not boxed in London for a few years so I can’t wait to make my return to the ring and soak up the atmosphere from the crowd and put on great show.”

“Ramirez is a very good unbeaten fighter and he comes from a good stable,” said Selby. “He’s trained by Fernando Montiel’s brother, Fernando was a former challenger of mine and his brother is a very experienced coach.

“He has a decent ranking with the IBF and you don’t get there by accident, he’s worked his way into the mix and he’s going to give me a tough test. He’s a southpaw which is another challenge for myself.

“There’s a lot of pressure on this fight, one loss will mess up my whole career. There’s massive fights to be made against Josh Warrington and Carl Frampton next year so it’s vital that I come through this fight.

DeGale and Selby top a huge night of boxing in London on December 9th.