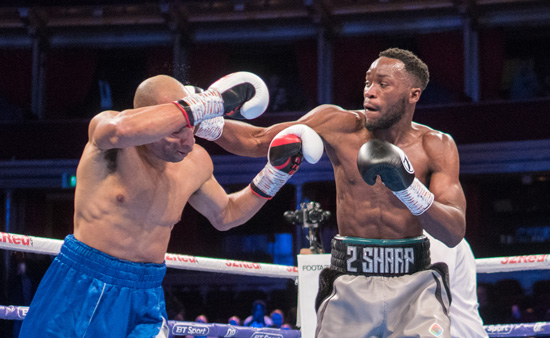 There is an art to knocking out an opponent- and it seems that Battersea-boxer, Denzel Bentley has really got the knack of it.

The heavy-hitting middleweight searches for victory number ten on April 27th at The SSE Arena, Wembley and he will be hoping to add a ninth knockout to his professional resume.

There isn’t many boxers in the country that can boast a better knockout percentage than Bentley’s and loading up with your punches isn’t the way to approach landing the lethal blow.

“It’s more to do with timing and slowing down my work” explains the 24-year-old.

He continued; “Because, when I first came here [Peacock gym] I was an amateur and it was all about fast work and a high work rate because it’s only 3 rounds.

“So, when I came to the pro’s it was all about settling down, picking my shots more and timing just comes naturally better because you’re thinking about your work.”

Denzel will be in a six round contest when fighting on the undercard to stable-mate Daniel Dubois’ heavyweight bout against Richard Lartey and will be looking to take his undefeated record into double digits.

The Londoner will be hoping another victory on April 27th will be the gateway to fighting for the opportunity to claim a maiden title as a pro.

“The Southern Area title- I’ve been trying to chase that for a while now.

“The English title”- which is currently held by Reece Cartwright and will be defending the belt against Jack Cullen in May- “if the winner is free and I can jump in with one of them, I’d be more than happy to do that!

“In actual reality, I’ll fight for any title to be honest! 50/50 fights- I want them type of opponents.

“I don’t want to be hanging about fighting opponents I am meant to beat because I’m in here everyday training hard- sweating, putting my life into this, making sacrifices- so I don’t want to waste it on meaningless fights. I know you’ve got to build, but I want to get stuck in there.”