All the stars are aligned for another chapter to be written in the annul of boxing folklore at Liverpool’s Echo Arena this weekend.

Several hurdles tumbled in the interim but on Saturday evening, in his 50th paid gig, the hugely resilient and fanatically followed pride of Merseyside finally gets his opportunity to add a bonafide world title to a CV which is already richly decorated.

‘I’ve had a hell of a journey and it’s all the ups and downs that make it so brilliant. I’d not change it for the world.

‘Finally, in my 50th fight, I’ve got my shot at the ‘Big Time’, a ‘full’ world title challenge against a Manc in my home city. It’s a dream come true and I have to thank Frank Warren hugely for making it happen.

‘Flanagan told me he’d never have to fight me in Liverpool. He was champion, he’d dictate terms but our promoter knew that I was the bigger draw and, even though I’m challenger, he must come to me. That’s a huge boost for me, huge blow for him. There’ll only be two of us meeting in the ring but I expect the crowd to play a massive part in getting me up for it.’

In truth, the run-up to ‘Dirty Derry’s’ defining night has been less than ideal. He has seldom looked more complete than when he boxed and bashed his way to a tight but merited 12 round decision over rough and lawless Canadian Tony Luis for the WBA ‘interim’ belt in one of last year’s finest fights.

‘I’ve been in and out of camp for 12 months but I’m so lucky that, in Danny Vaughan, I’m blessed with a top coach that really knows his boxing,’ says Mathews.

‘After the year I’ve had, most would be a bit undercooked or overcooked but I’ve eaten right and lived the life of an athlete, 24/7. I guarantee I’ll arrive for battle right on the ‘money’, and that’s all down to Danny.

‘I actually think that being out the ring for 11 months will prove a massive bonus. I’ve put my body through hell but it’s been enjoyable and my fitness has never been better. I’m so looking forward to it. Let’s just pray Flanagan doesn’t go and crack a toe nail!’ 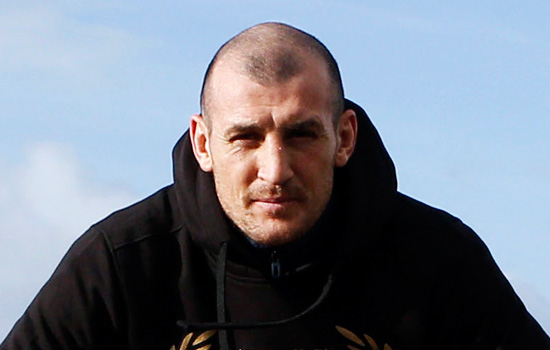 The Manchester champion is an increasingly formidable force; unbeaten in 29 and, at 26, improving beyond all recognition. He lands in Liverpool in the form of his life following back-to-back second round title wins over feted yanks Jose Zepeda and Diego Magdaleno. Despite venturing into hostile terrain, the bookies list him at 5-1 on to retain his belt.

Fearless Mathews has a cynical take on the Manc’s alleged ‘tendonitis’ which forced the fight to be delayed for a month.

‘I think Terry overlooked me, looked past me, and enjoyed his Christmas a bit too much then got wind of the shape I was in and realised he was in deep waters,’ claims Mathews who previously conceded to Flanagan in a three round Prizefighter sprint and also capitulated against unbeaten Italian left-hander Emiliano Marsili, the European champion (both in 2012).

‘When I had difficulties with southpaws in the past, I wasn’t with ‘The Boss’, Danny Vaughan. I gel with him so much. I’ve had plenty of quality southpaw sparring over in Marbella. Danny’s set a plan and if I stick to it, I’m very confident I win comfortably.

‘People are blind to the fact that there’s so much in my favour. I think everyone acknowledges that I hit harder and I’m more experienced but I’m also far cleverer and quicker. Remember, as a teenager, I won the Junior Olympics and ABAs. I boxed for England, all stuff Flanagan never achieved. My speed will play a big, big part Saturday and he’ll be in for a shock.’

Formerly WBU featherweight boss and a two-weight English champion, Mathews has earned iconic status in the city for the ‘rock ‘em, sock ‘em’ manner in which he has hovered up British, Commonwealth, International and ‘interim’ world titles at 135lb. However, he knows victory on Saturday will elevate him to an altogether higher plain.

‘I’ve had the WBU and ‘interim’ but this is the proper one,’ he acknowledges.

‘It’s winning the belt that motivates me, more than beating the man who holds it. I grew up worshipping Naseem Hamed and Joe Calzaghe so to hold the same title as those idols would be a tremendous honour. I’m desperate to join the short list of world champions from Liverpool and Terry’s in my way so has to pay.’

‘I’ve done everything that (MGM Gym strength and conditioning coach) ‘Taff’ and Danny have asked me to do in the gym, now I have to do it in the ring, on the big stage this weekend. I know I’ll not get a second bite at the cherry. It has to happen for me on Saturday.

‘It’s a huge ask and I know I’ll have to be at my very best – better than ever previously – but it’s my crowd and I believe I’m smarter and punch harder. Me at my best beats Terry Flanagan at his best. Simple as.’