Liverpool hero Derry Mathews has vowed to beat Manchester’s Terry Flanagan in what he says will be his last ever shot a world title. The all-action Scouser is back in Spain preparing for his make or break showdown with his bitter North West rival on Saturday 12th March, exclusively live on BoxNation. 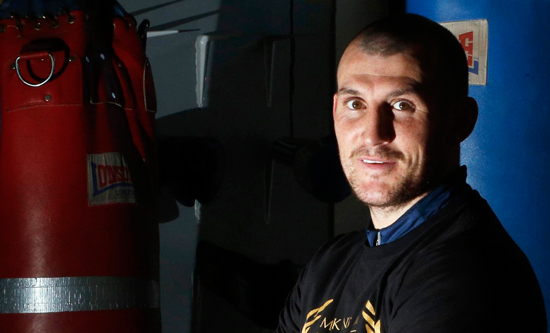 “Everything in my career has led up to this moment and it really doesn’t get any bigger than this. If I get beat I’m not going to get another shot at a world title and that’s what’s driving me on in the gym. Losing just isn’t an option. When I beat Terry he’ll be able to come again because he’s still young but this is last chance saloon for me,” said Mathews.

He added: “I should have been waking up on Valentine’s Day as a world champion but instead I’m back in the gym putting the hours in. Waiting another month makes no difference to me because he’s only delaying the inevitable. I believe that the best Derry Mathews beats any lightweight in the world. I’m the biggest puncher out there with both hands and I can knock people out with my left and right. I’ll be taking Terry to places he’s never been before.”

Flanagan, 26, is back in full training after making a successful recovery from his injured left foot that forced him to postpone his word title defence. The unbeaten Mancunian has been working closely with Manchester City’s lead physiotherapist Paul Kelly in a bid to return to full fitness but Derry says he is surprised Terry’s team chose to postpone the fight.

He said: “According to Terry he’s the fittest man on the planet, he’s the best lightweight in the world and I’ve got no chance of winning. Despite all that his camp didn’t want to give me even half a chance of winning and I don’t get that. One minute they’re saying he’s going to knock me out and it’s an easy fight for him but as soon as he gets a slight injury they push it back. That doesn’t look confident to me. He was on the pitch at City a couple of weeks ago kicking a ball about so it couldn’t have been that bad!”

Flanagan didn’t mince his words when the pair went head-to-head at last month’s heated press conference, boldly predicting that he’ll knock out Mathews early on in the fight. ‘Dirty’ Derry lost to Flanagan back in October 2012 in a Prize Fighter tournament and according to Flanagan took a pasting when the pair faced each other in sparring.

“If he wants to talk about sparring then let him. He goes in to spars to win them whereas I spar to practice and try new things out. If he’s taking confidence from a spar that happened years ago then he’s going to be in for a big shock. I’m a completely different fighter now and I’m coming off the back of some great wins. I’ve got a solid game plan and if I execute it well I’m going to win this fight in style,” said Mathews.