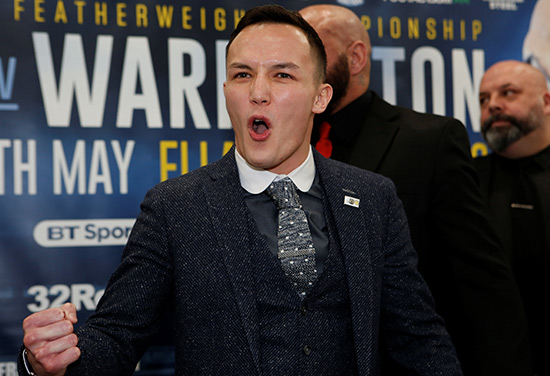 The countdown to May 19 began in Leeds on Wednesday when Lee Selby and Josh Warrington – not for the first time – exchanged a few words. This time it is for real though and Elland Road will play host to one of the city’s favourite sons when he challenges for the IBF world featherweight title. In his latest Fighter Diary Josh offers up his early thoughts on his dream night becoming a reality…

TO BE QUITE honest, the prospect of fighting for the world title against Lee Selby on the pitch at my home football club should be getting me jumping on tables and getting all over excited.

But, for me, I feel like I have done this before, I feel like this is meant to be and I am just enjoying it – taking it all in. I am just trying to take in the moment, calmly.

In the last couple of years I was gifted an opportunity and I wanted to change the date so the fight didn’t happen. Nobody would have thought I would be here a couple of years later, having made myself mandatory and fighting at Elland Road.

Just under three years ago I let the emotion and mayhem of my passionate Leeds support get the better of me and I didn’t perform to my best against Dennis Tubieron.

I won’t have any problem containing myself this time around even given the magnitude of the occasion. Again I feel like I have been here before, every time I have walked on the pitch at Elland Road I have pictured myself, imagined what the emotions will be like and have felt them.

So yes, there is going to be a little bit of me that will be excited, but it will mostly just be a case of taking it in and enjoying it.

Once I get in that ring and the bell goes then it will just be time to go to work.

People might say that nothing can prepare me for what I will encounter in May but when you have thought about it so many times, when you have dreamt about it of a night and there has been constant talk amongst your circle of friends, you do kind of feel you have been there already.

So much so that your brain can’t really distinguish between what’s real and what’s not. You get these thought patterns and signals and it sits in there as an experience.

Like I say, every time I have walked down the tunnel I have pictured myself walking out to fight – I have even pictured driving in and going into the changing room. I have pictured the buzz around the sitting with people saying ‘are you going to the Warrington fight at Elland Road?’ and billboards and posters all around.

I have pictured all of this and it kind of feels like the norm. All I’ve got to do now is get into camp, train my balls off and win that world title.

The reaction around the city to the announcement of the fight has been just as I expected it to be. My phone has been red hot, social media has just exploded, but I didn’t expect no less and that is not meant to sound cocky or arrogant.

I always knew that when this fight happened what the reaction would be. I’ve said for years that even little old ladies come up to me in the street and ask when I am fighting that Selby at Elland Road.

It is happening now and it is something that the fans have wanted. They have craved it for years ever since it was first spoken about and now it is here they will come out in their masses and all get behind me.

It is a great feeling to be finally in position to prepare for this fight against Selby after a couple of false starts, but it is a fight that I always knew could still happen.

Even if he didn’t think so, I knew that I would still fight for a world title and I knew I would fight at Elland Road, regardless of who it was against. If I was fighting against Scott Quigg or Carl Frampton the fans would still turn out, but the bonus is with Lee is that there has been a bit of needle in there for a few years and a lot of people don’t like him around this neck of the woods.

It is because of his arrogance and demeanour and the way he has slated the Leeds fans and disrespected them.

He said I would never get a shot or win a final eliminator, but I am here and you can’t mess with destiny.