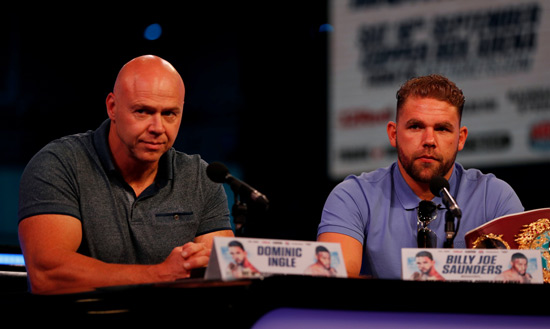 Undefeated WBO World Middleweight Champion Billy Joe Saunders has linked up with Dominic Ingle, moving to Sheffield to train with his experienced new coach on a permanent basis.
On September 16th, Saunders makes the second defence of his Word Title against New Yorker Willie Monroe Jr at the Copper Box Arena.
Speaking to iFL TV about the new arrival in his gym, Ingle said: “You can tell straight away that he can pick things up very quickly and adapt. That’s what makes him an exciting fighter.
“He’s not ‘crash, bang, wallop’, he’s a smart boxer. He can fight on the back foot and front foot. Hopefully he rolls into the fight in September and puts on a good performance.”
Last time out in December, Saunders laboured to a points win over Artur Akavov, and the Hatfield man was the first to admit he was under-prepared and not at his best on the night.
“The thing about Billy Joe Saunders is he can fight – he was brought up fighting. That’s not what he needs to learn,” argued Ingle. “It’s just a bit more discipline with his diet and lifestyle. I think we’ve done that.

“In the three weeks he’s been up here he’s trimmed up, he’s dropped a stone, he’s enjoying the training. When I talked to him about how he’s done it [the weight] before, killing himself in the gym and starving himself, it’s not the way to do it. We’ve done something different and I think he’s really enjoying it.”