DON’T KNOCK RIO FOR HAVING A BASH 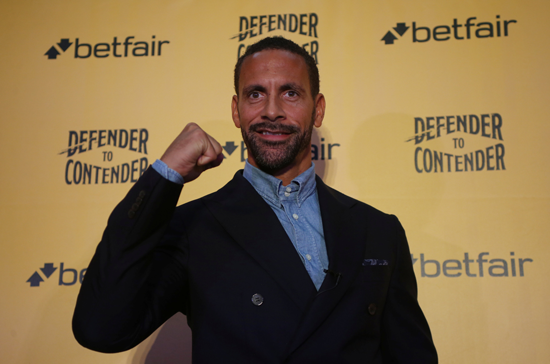 SO RIO FERDINAND wants to be a boxer.

There will be – and already has been – a lot said and written about the 38-year-old former footballer taking a punt at the noble art as part of a promotional campaign by the bookmaker Betfair.

Publicity-driven stunts such as this will always arouse suspicion amongst the cynics and I agree that boxing is never a sport that should taken up lightly.

Any more than Victoria Pendleton making the transition from racing bikes to horse racing – a switching of saddles that is probably far more dangerous than hopping in the ring for a four-rounder.

Elite sports people have always had a problem when it comes to calling time on their chosen field of excellence and sometimes find the need to do something extreme to fill the void, to sate that competitive edge that lives on long after the legs are deemed to be gone.

I have long lobbied the case that the sport of boxing is a force for good – the training, social integration, respect, the atmosphere and discipline in the local gyms, the release of potentially negative energy and, most of all, a sporting vehicle to get kids off the street.

Even Prince Harry revealed recently how boxing training proved therapeutic when he was battling lingering mental demons following the passing of his mother.

It is a sport that embraces all age groups because you don’t actually have to enter into direct combat and get hit.

There was a lot of ridicule flying around when Andrew Flintoff gloved up for a television documentary in 2012 in what ended up being a one fight heavyweight career.

What cannot and shouldn’t be ignored is the health and fitness gains Flintoff gleaned from the experience. The then retired cricketer, who was dogged by knee injuries, achieved a level of fitness – and sobriety – he has retained to this day and was ultimately able to make a return to his own sport in the shorter form of the game.

So, while I am not a great advocate, I don’t have a particular issue with Ferdinand entering the boxing arena, as long as he does it properly and under the auspices of the British Boxing Board of Control.

The easy – and more treacherous route – him and his backers could take is to take part in a ‘white collar’ fight which, in old money, is unlicensed boxing.

It would be the most expedient shortcut, but it is a dangerous road to go down because there is not the stringent medical and safety provision that is in place in the professional game.

Ferdinand, rightly, is looking to do it properly – with the respected former world champion Richie Woodhall on board as trainer – and he will have to prove himself proficient as a boxer before he is permitted to enter the ring.

He is sure to be fiercely scrutinised by the Board and, quite simply, if he doesn’t pass muster, he won’t fight.

Talk of titles is premature and ridiculous, but if Ferdinand for his own reasons wants to embark on a little boxing journey, should we really object?

It is likely to create considerable interest and I am sure there are financial interests at play here too as his four-rounder will certainly be more lucrative than for an amateur turning over.

What it might do is bring to the attention of the government the benefits of training for this sport does for people battling issues and the value of local boxing gyms for the young and older.

It will be a story, a journey, which people will tune into, but don’t get carried away with the title talk or him calling people out. Those sort of fights won’t happen.

Ferdinand remains a long way from stepping between the ropes and, even if he doesn’t make it, he will reap the benefits of trying